The world's best and most passionate tribute to Queen - LIVE AT SEVENWINDS CASINO
This event ended Sat, Jul 02, 2022 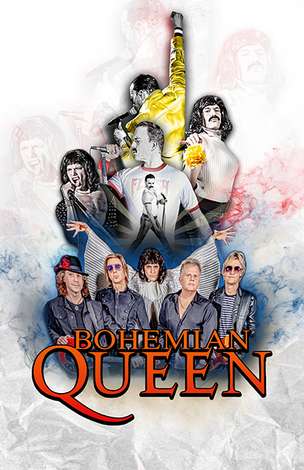 On the wings of rock & roll, from '70s London to modern day Los Angeles, comes one of the finest tributes to the world's most majestic, dynamic, and influential bands of all time... Queen.

Now, all tribute bands are NOT created equal. The best are driven not only to recreate an era but to embody it, and to capture a spirit that entices fans to relive a memory.  The power of music brings you back to your youth.  Most new fans want to come out and share this authentic ‘vintage’ musical experience with their families and friends!

Bohemian Queen is a national ‘A’ level touring theatrical show providing a full-throttle ‘LIVE’ rock-n-roll concert experience.  Comprised of LA's finest players and voices, no tricks or tracks are allowed!  These purist musicians who are true Queen fans, come together to bring to life a classic catalog of songs and melodies, delivering a star-studded performance the way Queen has dazzled arenas and stadiums for decades.  It’s a Kind of Magic!  Five musicians with coast-to-coast resumes on a mission to be the world's best and most passionate tribute to Queen.

Many tributes focus on the flamboyant contributions of Freddie Mercury, but all great bands are larger than the sum of its parts, which is why Bohemian Queen showcases a cohesive ‘LIVE’ band, displaying the dynamic musicianship and stage presence from each Queen band member.

Faithfully performing hit after hit, Bohemian Queen delivers a vibrant, energetic show that demands your attention as you smile, dance, and clap to the beat!  Everyone LOVES to sing-along with ‘We Will Rock You’, but Bohemian Queen keeps that FUN, interactive spirit alive throughout their entire show!

The influence of Queen crosses cultures, age groups, and music fans who are all searching for human connection in sharing the belief that music can unite us all.

It all starts with the ringleader...

Vocalist Paulie Z channels the soaring vocal power of Freddie Mercury, fearlessly commanding the stage, and LOVES to dress up in Freddie fashion and swagger with multiple costume changes. Hailing from Brooklyn, NY, he led his own band ZO2 through a tour with rock heavyweights KISS and Poison, a band which was also chronicled in the IFC comedy series “Z Rock.” Upon moving to Los Angeles, Paulie was also recruited to sing with the legendary UK glam rockers Sweet.

The amps get cranked...

The grooves get thumping...

Canadian-born bassist Aaron Samson grew up in Los Angeles with the music bug, quickly landing himself on the legendary RCA Records roster and the classic documentary “The Decline of Western Civilization Part II: The Metal Years.” A protege of legendary composer David Foster, Aaron would go on to play with various LA bands as well as rock heroes like George Lynch (Dokken) and Steven Adler (Guns 'N Roses) and John 5 (David Lee Roth, Marilyn Manson).

All accented with shades of melody...

This is the sound you love and remember.

Bohemian Queen delivers the musical virtuosity of Queen, with all the famous elements of the album tracks and iconic imagery recreated with care.  Open your eyes and ears and you're there in the golden era of Queen.

Few bands span generations of fans and bring people together like Queen.

Few bands have the worldwide recognition of Queen.

Few bands have songs that everyone sings at concerts and sporting events in stadiums, arenas, clubs across the world.

No Queen tribute can deliver the songs and showmanship with this level of passion and detail.

Bohemian Queen seeks to deliver the highest caliber Queen show that an audience can experience!

It’s more than just a “Freddie” show, the entire band consists of world-class musicians, performers and vocalists, this is truly the best Queen cover band, and one show you will love! Bohemian Queen features a national-act caliber lineup of muscular musical talent, every member of this theatrical tribute has fronted their own bands, and is an accomplished musician in their own right, with national-act caliber talent! Featuring lead vocalist PAULIE Z (Paul Zablidowsky) as the amazing Freddie Mercury. Paulie Z brings all the theatricality and vocal gymnastics of the late, great Queen front man to life in this ‘LIVE’ rock & roll spectacle.