Brave Spirits Theatre pairs the well-­loved comedy A Midsummer Night’s Dream with the rarely produced The Two Noble Kinsmen to interrogate to what lengths we will go for love and what happens to those who get left behind. Though Midsummer was written early in Shakespeare’s career and Kinsmen was a much later collaboration with Fletcher, both stories are set in the realm of Theseus, who, days before his marriage to Hippolyta, must decide how to manage two young men rivaling for the attentions of one woman.

The Two Noble Kinsmen is likely to be new to most audience members. Based on a tale from Chaucer, Kinsmen follows the changing fortunes of two best friends, Arcite and Palamon, who fall in love with Hippolyta’s sister, Emilia. With a more melancholic tone than Dream, the twists of Kinsmen’s plot will keep the audience guessing.

BST Artistic Director Charlene V. Smith returns to the director’s chair for The Two Noble Kinsmen, after playing Juliet in last summer’s Romeo and Juliet. She previously directed BST’s Richard III, a production Shakespeareances.com touted for its “clarity of vision and superb talent.” 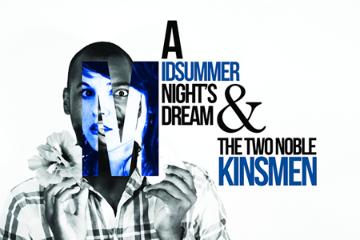