20 dollars tickets include buffet and souvenirs

10 dollar tickets include entry only

*Once Tickets are purchased they will be at will call

This Concert is a Red Carpet Event Dress appropriatley in your best outfit !!

Pictures & Recording will take place during this event. This is a grown event..

This is a concert celebrating the release of Vito Brown's 1st Official Album"I AM VITO BROWN" it also celebrates Vito Brown's 1 year Anniversary from his last release party where he had Almaz Resturant packed with 150+ people.. so this should be an even more amazing event....

The Concert will be Hosted by Mocounty's Lex Boogie and DMV's Premier Party Host Crown Royal!! 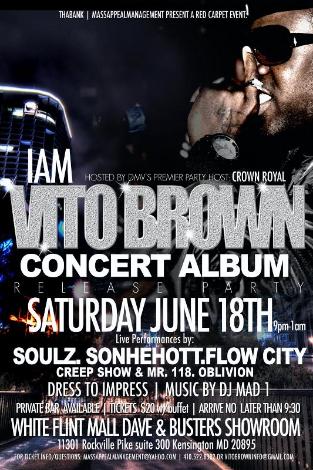