"THE COME UP" Concert & Fashion Show

This event will be hosted by SC Models Justina & Kalamela also known as the #POPPINPRIMAS on social media. They have been in the modeling industry for several years.

History in the making! A huge end of the year event with a Fashion Show featured by Charmed and Beauty Boutique and live performances from two well known artists. David Correy, partitcipated on X-Factor in 2012 performing Bruno Mars' "Just The Way You Are". He is also known for featuring in the theme song"The World Is Ours" for the FIFA 2014 World Cup . Karlos Rose is  known for his hit cover  "Just The Way You Are" but in a spicy feel of bachata. At 18 years old, Rosé became the youngest artist to hit the Tropical song charts three times with the  No. 1 songs "Niña De Mi Corazon", "Just The Way You Are" and "Infiel". For the first time in history, Karlos Rose and David Correy will be performing on stage live together singing "Just the Way You Are" by Bruno Mars. 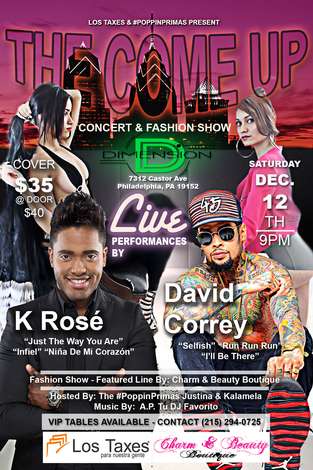