Mystical Waters, an outstanding composer, arranger and multi-instrumentalist musician who plays marimba, wind synthesizer, sound module, mallet-Kat and various African/Brazilian percussion. He blends a mixture of jazz, Caribbean, world beat, spiritual, blues, classical and new age music to create a variety of universal, relaxing and provocative sounds. Mystical has composed soundtracks for several documentaries, and developed musical workshops for Washington metropolitan area public and private schools.  He has performed at the Emmy and Oscar Awards; The Cerritos Performing Arts Center Cerritos CA; The San Diego Symphony Concert Hall; The Convention Center; The Lincoln Jazz Center N.Y; The Kennedy Center; The United Nations N.Y; The Strathmore; Blues Alley and more.  Mystical has traveled internationally and performed in South America, Europe and the Caribbean. In addition, he is currently working on the second CD.

Wake Campbell, Family & Friends - Wake is an accomplished saxophonist, song writer and producer originating from Washington DC. Wake is currently working on his 6th CD as a solo recording artist. The soulful Grooves and intoxicating melodies on this CD will have you hooked after just a few notes. Wake transitions from soprano, to alto, to tenor with ease and takes you along for a ride you won’t soon forget. Wake was introduced to Jazz while in High School. Like most aspiring young jazz musicians, he fell in love with the music of Bird and Trane. After a couple years, as a student in the Jazz Studies Department at Howard University he took advantage of an opportunity to perform throughout Europe with a group organized by the University.  While in Europe he was introduced to the music of Grover Washington Jr. and Ronnie Laws; after hearing their recordings he was inspired to start writing his own music. Wake eventually, joined the Army.  He attended the Army/Navy School of Music, and spent 8 years in the Army Band System.  He performed throughout Europe, California and the DC area. Wake still resides in Washington, DC.  For years, he has worked with some of the most talented musicians in the DMV area.  So, if you’re a fan of artists like Grover Washington Jr., Ronnie Laws, Gerald Albright, Kirk Whalum or David Sandborn, then you need to sample some of Wake's amazing music inspired by these incredible artists.  Also, you will definitely, enjoy (All) 6 CDs of Wake Campbell that will be released soon online at www.itunes.com, www.amazon,com, www.cdbaby.com.

Jason Djsmoove Felton, will be the MC and DJ for the event.  Additional information about Djsmoove is coming soon.

CDs for these amazing talented musicians will be available for purchase after the show.

For additional information, please contact us at www.Trinity310.com or tteps310@gmail.com 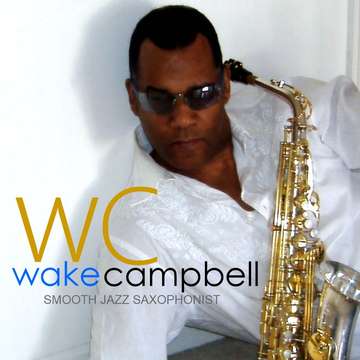