In the history of Jazz music, there is only one bandleader that has the distinction of having his orchestra still performing sold out concerts all over the world, with members personally chosen by him, for more than 30 years after his passing. Pianist and bandleader William James “Count” Basie, born in 1904 in Red Bank, New Jersey; was and still is an American institution that personifies the grandeur and excellence of Jazz. The Count Basie Orchestra has won every respected jazz poll in the world at least once, won 18 Grammy Awards, performed for Kings, Queens, and other world Royalty, appeared in several movies, television shows, at every major jazz festival and major concert hall in the world. Some of the greatest soloists, composers, arrangers, and vocalists in jazz history such as Lester Young, Billie Holiday, Frank Foster, Thad Jones, Sonny Payne, Freddie Green, Snooky Young, Frank Wess, and Joe WIlliams, became international stars once they began working with the legendary Count Basie Orchestra. This great 18 member orchestra, today directed by trumpeter Scotty Barnhart, is committed to continuing the excellent history started by Basie of stomping and shouting the blues, as well as refining those musical particulars that allow for the deepest and most moving of swing.

Discount ticket prices for veterans, military, seniors, and students, are just $30, with General Admission tickets at $35, and Premium Seating at $40, but only if purchased in advance. Ticket prices at the door will be $5 more. Tickets will also be on sale at various business locations around the Santa Clarita Valley:

All proceeds from this concert will benefit the West Ranch High School Music program, which is comprised of award winning performing groups that provide music, excitement and fanfare to hundreds of local, national, and international events each year. 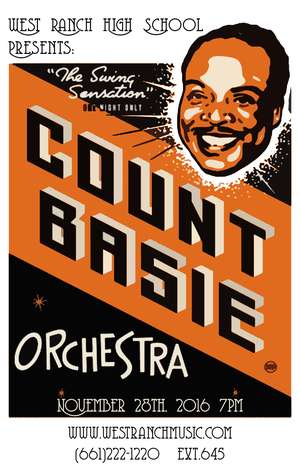