FROM THE MAKERS OF "DRIFT" AND "RISE"

From Chris Patterson and Jim Klug - the filmmakers who created the highly acclaimed movies DRIFT and RISE comes CONNECT, the most ambitious, large-scale fly fishing film ever made. Continuing in the tradition of the multisegment, multi-story format that Confluence Films has become known for, CONNECT introduces a number of new locations, exotic species, and compelling characters that epitomize and exemplify the sport of fly fishing. Shot on location in Japan, Yellowstone National Park, the Yukon Drainage of Alaska, the flats of Cuba, the coast of Maine, and in the wilds of Tanzania, Africa, this feature length movie will once again transport viewers around the world in search of new waters and exhilarating travel experiences. CONNECT features well-known anglers Greg Vincent, Jeff Currier, Jimmy Bartschi, Craig Mathews, Masa Katsumata, Brian Porter, and Captain Eric Wallace, and more than a dozen different fish species, both freshwater and saltwater. As with DRIFT and RISE before, the cinematography, sound, and feel of CONNECT come together in a visual masterpiece that promises to re-set the bar for fly fishing films.

Join us for the Portland Premiere of this great film and have a fun evening while supporting great local conservation efforts.  100% of the proceeds from this event will go to The Freshwater Trust, Flyfishers Club of Oregon, Western Rivers Conservency and Wild Salmon Center.

Buy your tickets early, as the seating is limited and we expect the event to sell out. 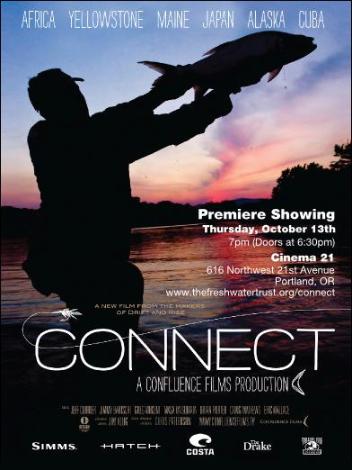