Madeloud.com is proud to bring you the next wave of female fronted rock as they present The Kid Henry with All New Episode at the Kraine Theater in New York City.

Formed in 2008, The Kid Henry has been a fixture in the resurgent Long Island music scene.  Featuring classically trained vocalist Alexandra Lombardi,  The Kid Henry combines their eclectic musical tastes to create a distinct sound that is unique but very accessible.  Often compared to bands like Alkaline Trio, Foo Fighters, Paramore, and Pretty Girls Make Graves; The Kid Henry pays homage to their influences, while creating a style of their own.

The self described musical blending of punk revivalist band Rancid and pop/rock band Paramore, All New Episode is storming the Long Island music scene with their own blend of energetic, catchy tunes; drawing equally on influences from ska and surfer rock as well, the unique sound of All New Episode leaves a lasting impression on all who listen. Matched with high-energy performances this band is definitely on the move.

Madeloud.com is the place to on the web to feed your underground music obsession.  MadeLoud allows users to buy digital and physical merchandise from artists, all in one place and with just a few clicks. On MadeLoud you’ll find music articles, interviews, and reviews in addition to a selection of songs to browse from. 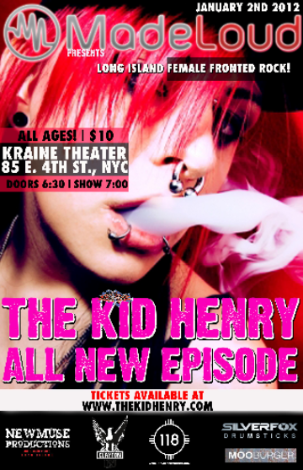