Make A Hero Presents: The Movement

Make A Hero Presents: THE MOVEMENT. Narrated by Robert Redford and Warren Miller, The Movement features powerful action and interviews from some of the world's greatest disabled athletes. It tells the dramatic story of a man returning to the mountain where his life was changed forever. The film features music from U2, Foo Fighters, and k.d. lang.

The Movement will premiere in Seattle at McCaw Hall for ONE SHOW ONLY: Saturday, December 3rd.

As Warren Miller narrates, "This is a movement for—movement itself."

And Robert Redford says: "It's about finding that turning point when physical disability is no longer a limitation, but a part of your character."

Chris Waddell, 13-time Paralympic medalist: "There are times I forget that I'm sitting down. I'm lost in the turn."

Rick Finkelstein: "It's been a long time—and the fact that I got hurt on the snow—psychologically I've got to overcome that."

THE MOVEMENT is the story of one man joining an uprising. He may not have chosen to be disabled, but now he must choose whether to face the mountain again. 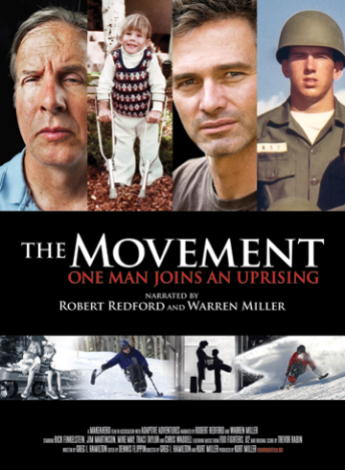