Vootie Presents Texas songwriter Robert Earl Keen on Friday, August 27th at the Emerson Center in Bozeman with special guests the Infamous Stringdusters. Doors open at 7:00 PM and showtime is 8 PM. Robert Earl Keen has long been at the forefront of the Alt-Country Americana movement associated with artists such as Lyle Lovett, Guy Clark, and Steve Earle. . Opening act the Infamous StringDusters are touring in support of their third album Things That Fly, on which the Stringdusters venture into virtually uncharted territory for an acoustic group: a sonically and thematically expansive album that lends itself to absorbed listening from start to finish. These guys kick! Tickets for the concert are also available at Cactus Records and Borders Books in Bozeman. 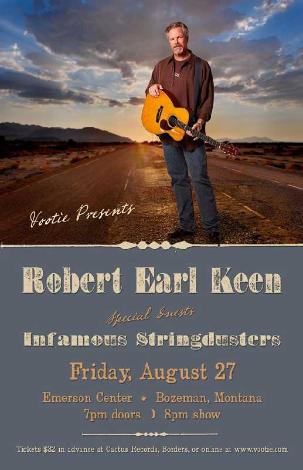