The Iowa United Nations Association and other community and student groups are sponsoring the annual Night of 1000 Dinners to benefit the U.N. Trust Fund to Support Actions to Eliminate Violence Against Women. The event, to be held at Old Brick (26 East Market St., Iowa City), will begin at 5:30 with an international dinner, featuring items donated by ethnic restaurants, served at 6:00 p.m. The program will include international music and a keynote speech and book signing with University of Iowa Professor Lisa Heineman.

The observance of International Women’s Day (IWD) originated in Europe in the early 20th century with an emphasis of working women. In 1977 the United Nations General Assembly invited member states to proclaim March 8 as the UN Day for Women's Rights and International Peace. IWD events around the world celebrate the achievements of women. 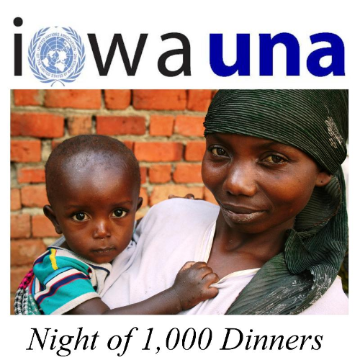