The legendary cuban timba band Charanga Habanera led by David Calzado is coming back to KY for a exclusive concert at COCONUT BEACH NIGHT CLUB the 30 of March 2012.

The last time the legendary band was here in Louisville was over a year ago and the show was talked about for months after. Lead by the charismatic David Calzado, the band plays Timba, a distinctly Cuban form of Salsa. Every show is full of high energy and they often go into the early hours of the morning. Without a doubt the group is one of the liveliest and most entertaining salsa bands coming out of anywhere. The music is nothing short of phenomenal and needs to be experienced live. 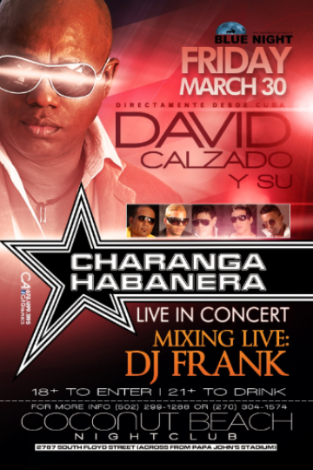