One of the best bluegrass bands in America - Live at Palm Coast Coffee.

"The Packway Handle Band mixes dark themes and old-time religion with a uniquely modern folk aesthetic that pins down just what American music is all about." -- Splice Today

It all started in Athens, Georgia in 2001 during a most peculiar spell when 5 or 6 bluegrass bands circulated the town.  The famous Athens, which had once spawned the B-52s, REM, Widespread Panic, and countless other indie, pop and punk acts, was now the home to a competing minority of bluegrass players. The Packway Handle Band emerged from this small scene, finding national acclaim first as finalists at the Telluride bluegrass competition in 2002 and 2003, then taking 2nd place in 2004.  The band's 2003 debut album, "Chaff Harvest" was produced using prize awards from a local Battle of the Bands. PHB was on a roll and has continued to win over fans and rack up awards.In early 2006 the band went on the road full time, wowing audiences across the country with close 4-part harmonies and their dance around two tightly-spaced condenser mics. The Packway Handle Band has emerged at the national forefront of bands that use this "gather around the mic" style. PHB's second full length record "(Sinner) You Better Get Ready" was recorded this way. Theirs is not a mission to preserve historical styles—it's just how they do what they do the best. And what they do best is rooted in thought provoking songwriting, clever choice and arrangement of bluegrass traditionals, and totally unexpected covers, all delivered with a crackling energy. If you get an idea of what Packway Handle is early in a show, you'll probably change your mind several times before they're done. But it's obvious their enthusiasm and sense of humor are honest, and that what they do appeals to broad audiences, even those who don't normally listen to bluegrass. Yes, they play bluegrass instruments, and hey, they even play them mostly in the bluegrass way; but you won't find a whole lot of lyrics about rambling or trains or wagon wheels, and you're not going to say you've heard this band before, unless you actually have. 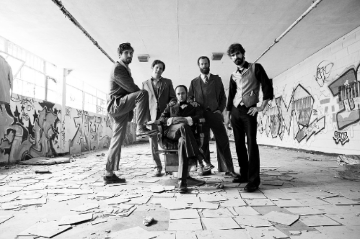