Bryan Starchman stars as Billy, A.K.A. Dr. Horrible, a budding super-villain whose plans for world domination continually go awry.  His two goals: getting accepted into the Evil League of Evil, and working up the guts to speak to his laundromat crush Penny (played by MCHS 2002 Alum Noel Morrison).   The only thing standing in his way is Captain Hammer, Dr. Horrible's superhero arch-nemesis played by William Bryan (he’s sort of a big deal back in his home state of Tennessee).  With one big score, Dr. Horrible could get into the E.L.E. and earn the respect of Penny, but only if he can keep her away from the dashing Captain Hammer...?

This show is sponsored by Academic Boosters Club, Inc. (ABC) A 501c3 organization whose mission is to supplement and enrich academic experiences and provide educational tools for Mariposa County High School students.?

Two nights only!  Friday September 21st and Saturday September 22nd at 7 p.m. in the Richard D. Fiester Auditorium on the MCHS Campus.

Tickets are $7 general admission and $6 w/ASB or Senior Citizens.  Tickets can be purchased one hour before show time at the door or on-line at www.ticketriver.com  Search: MCHS (processing fees may apply)

All profits from the show will go towards improving the Richard D. Fiester auditorium.

This show is Rated PG-13 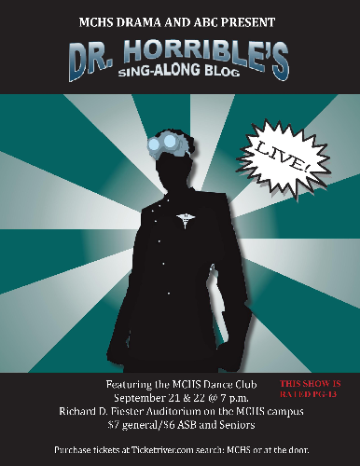