Back for another hit year and presented by the UVM Ski & Snowboard Club , Poor Boyz will be premiering their feature ski film"Revolver" at the Merrill's Roxy Theatre in Burlington, VT on September27th, 2010. Poor Boyz will be joined by Stept Productions & their film "Network" Doors open @ 7 pm, Show starts @ 8 pm.Jay Peak Resort will be present to raffle off sweatshirts, WESC headphones & Ski Packages...You'll also be entered to win an IPODnano when you pick up your Triple Major Pass during the event (UVMSS Members: $269 + Tax, Non-Members: $289 + Tax). Everyone who purchases a pass will receive afree Triple Major T-shirt.In addition to all the great stuff Jay Peak is bringing along, We'll be tossing out some extra schwag from all our great sponsors. 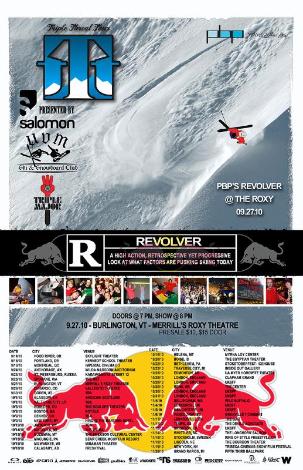