The YWCA Bucks County is proud to sponsor a Live Comedy Night for your entertainment.

The night's line up:

A veteran of comedy nightclubs, corporate functions, college shows and special events along the East Coast, Ken's observational comedy about life's day-to-day frustrations and foibles have earned him praise as "one of the best comedy writers in the city" by the Inquirer and Philadelphia Magazine.  He well-honed material has appeared on "The Tonight Show" and "David Letterman."  Ken has opened for a variety of national comedy acts including Pat Paulson, Andrew Dice Clay, Harry Anderson, Bob Nelson and Jackie Vernon.

A gifted monologist, and a versatile cabaret performer, Chris Rich has been praised by many corporations and colleges for her "clean and clever" act.  Comedy clubs have appreciated her talent as well, and have asked Chris to open for the likes of Jerry Seinfeld, Roseanne, David Brenner and Gilbert Gottfried.  A sought-after opening act for a variety of well-known celebrities in Atlantic City, where she won the Ladies of Laughter Contest, Chris also has multiple television credits including Comedy Central's "Premium Bland" and being a feature comediat on ABC's "The View" with Joy Behar.

Chris Coccia's act is a perfect combination of hilarious material and the ability to present it "in the moment" and in a way that never fails to open the audience up as he pulls them into a shared recognition of our own human-ness.  Chris keeps a full schedule working everything from the country's top comedy clubs to corporate events to colleges.  A winner of national comedy competitions, Chris has also appeared on Comedy Central, the Game Show Network, and SM Radio.  Chris is also a frequent and favorite guest on several Philadelphia based radio shows.

YWCA Bucks County is a nonprofit social services organization serving children, women and families since 1954.  The YWCA offers a wide and comprehensive array of educational enrighment and social services programs to support those less fortunate in our community - directly in the neighborhoods where they live. 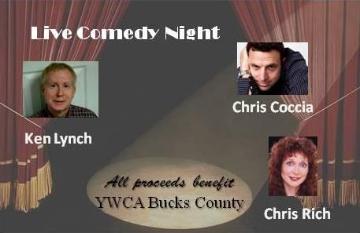