One aspect where the electronic trio really shines is their live show. Cosby Sweater has made waves in its first year playing festivals and supporting acts such as Pretty Lights, Minnesota, Digital Tape Machine, Tipper and Eliot Lipp. They have shown no signs of slowing down in 2013 and will continue to perfect their genre-bending sound?

Cosby Sweater is a new and vibrant voice in live electronic music. The versatile trio is comprised of David Embry on production and vocals, Nicholas Gerlach on Tenor Saxophone and EWI and Richard “Sleepy” Floyd on drums.

Cosby Sweater has been off to a sweltering start in 2012. The group released its first full-length album “Hey Girl Hey” in July and then later followed up that release with an EP dedicate to remixes of Christmas classics called “The Christmas Sweater Vol. 1”. The band has also released countless remixes and mash-ups over the course of the last year. 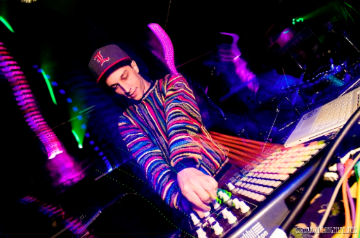