After undertaking a fruitful existence as a young larvae, (enjoying frequent local radio airplay, constant Brisbane and interstate shows as well as glowing reviews of the previous EP), Pink Bullet have finally grown some appendages, lungs and a drinking habit to emerge from the pool as a legitimate musical act.

“If these Aussies can produce more than 20 minutes of this, they will most assuredly be a force to reckon with” (Progressive Magazine, winter/spring 2009)

Pink Bullets second release “Salt Vultures” definitely answers the call. More than evident in the EP is the bands evolution into a new sound, a new outlook on writing and a more accessible culmination of tones and composition, which will surely silence the critics and put some extra grunt into your grandmother’s bingo games.

The CD will be released at a club night event at ‘The Alley’ in the city. Supporting ‘Pink Bullet’ will be up and coming act ‘Seismic Toss’, artwork by Tim Warren (as well as canvases of the CD artwork), CD’s and T-shirts available for cheap, and plenty of tasty tunes to dance the night away to. Oh and did we mention its BYO!?! That’s enough to lure a moray eel out of bed.

So bring all of your friends, that weird uncle (everybody has one) or even just yourself down to the Alley on Saturday 5th of Feb, and see Pink Bullet cement their place as one of Brisbane’s most unique and entertaining acts.

Or by contacting the band

(capacity is limited so get in early) 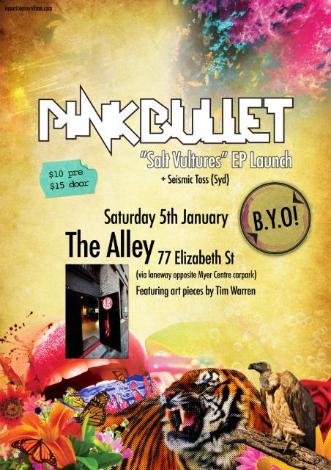 Map of The Alley
The Alley
77 Elizabeth Street, The City,
Brisbane, OT 4009