It's the 25th Anniversary of 2019's most unbelievable repertory film discovery! Directed by Stewart Raffill - the same genre warrior behind MAC AND ME, THE ICE PIRATES, and MANNEQUIN TWO: ON THE MOVE - TAMMY AND THE T-REX is a love story as old as time. This post-JURASSIC jam stars the heavenly combo of Denise Richards (STARSHIP TROOPERS; WILD THINGS) and the late Paul Walker (THE FAST AND THE FURIOUS franchise; SHE'S ALL THAT) in an unprecedented mishmash of rom-com tropes and R-rated horror thrills. 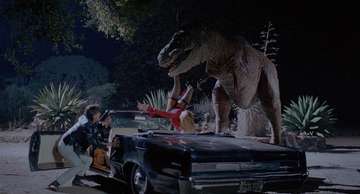