Steve Kelly and Cherry Cherry is the Premier Neil Diamond tribute!
A seasoned performer, his shows are high energy and deliver a spot on tribute. His positive attitude, love of music, and dedication to the fans is evident from the greeting prior to the show and post show farewell.
Steve’s love for music and performing began early. At 13 he was chosen for the lead in Gilbert and Sullivans The Mikado. At 15 he toured with the high school vocal jazz group around 6 states in the Northwest. After high school joined the USMC and had a band called Black Diamond, while based in California, named after one of the towns where he grew up. After the service, he performed in classic rock bands and started doing tributes in ‘89 shows under Shades of Purple and Trust Me. His bands have opened for many great bands….Pat Benatar, Peter Frampton, Joan Jett, April Wine, Loverboy, 38 Special, Molly Hatchet, Ted Nugent, Montrose, Rick Derringer, Foghat, Dokken, Skid Row, Blue Oyster Cult, Ratt, Buddy Miles, and many more. Hall of famers such as Chris Slade of ACDC and Alan White of Yes, Steve Fossen of Heart and have sat in on many shows. Had privilege to play over 30 shows with Randy Hansen one of the greatest guitar players in the world and Hendrix tribute.
Steve performs spot on tributes to Neil Diamond, Bad Company, Bob Seger. Come and out to one or both and Rock! 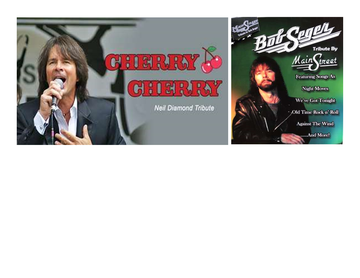