Are you a fan of the hit television series “Ghost Hunters” or “Ghost Nation”?
Come meet & greet with “The Paranormal Couple” Cody & Satori, participate in a Question & Answer session, view a few haunted objects, and Ghost Hunt the HAUNTED Primitive Crow shop (as seen on an episode of Travel Channel’s Ghost Nation)!
**Merchandise will be available
ABOUT “THE PARANORMAL COUPLE”
Cody Ray DesBiens and Satori Hawes from the Travel Channel series “Ghost Hunters,” are paranormal investigators / researchers with The Atlantic Paranormal Society (TAPS), which was founded by Satori's father (Jason Hawes) in 1990. After working together on a few TAPS cases, they found that they had a connection to each other like no other. Cody and Satori found that when they are together.. and only together... it seems that they have the ability to open a door to intelligently communicate with the other side. What makes their communication different than psychics or mediums is that the intelligent communication can be heard by others too. This ability has enabled both of them to gain a better understanding of the other side, and to help bring messages to those who need it most. Cody and Satori are also the curators of "The Paranormal Couple's Haunted Museum of Objects, Oddities, and Curiosities. What started out as a few reportedly haunted items from clients, grew into a large collection of objects from around the world. As Cody and Satori's names became more known to the public through “TikTok” & their appearances on “Ghost Hunters” & “Ghost Nation,” their haunted collection began to expand. Today, "The Paranormal Couple" has dedicated their time and care to those in need, both living and dead. They are passionate about saving haunted objects from destruction, and helping those who feel the need to rid themselves of said pieces. Together, Cody and Satori are now bringing their collection on the road to educate and inform others about haunted objects, trigger objects, and the care / precautions that come with them.
Join Cody Ray DesBiens and Satori Hawes on their paranormal journey.…
Questions? Contact Event Organizer 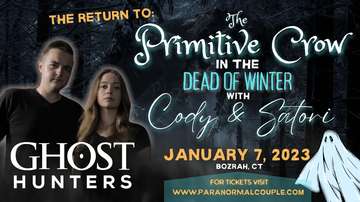