(January 9, 2020 - Nashville, Tennessee)  Love doesn’t come from a moonshine jar, but Valentine’s fun comes with Comedian Killer Beaz and the Johnson City Holiday Inn Conference Center at the 2nd Annual “Funny Valentine’s Extravaganza”.  Fresh from his fourth season of appearances on the Discovery Channel’s hit series Moonshiners, Killer Beaz brings his hilarious stand up performance to the Tri-Cities to help eastern Tennesseans celebrate Valentine’s Day.  The Holiday Inn will play host for the show at 7:30 PM, and will feature dinner and show and room packages.  Tickets and information are available at killerbeaz.com and all packages are available by calling or coming by the front desk at the Holiday Inn.

The comedian is currently in having a ball with his Moonshiner buddies, and hard at a tour of the country promoting the release of his latest DVD, “There’s That!”, DVDs and downloads available now at killerbeaz.com.  His tour this year also includes performing under contract with Carnival Cruise lines and he just performed again at The Ryman Auditorium for The Grand Ole Opry.  Killer Beaz has been entertaining audiences for over three decades.  He is an award winning artist and has been signed with both Sony and Warner Brothers Records, and received reviews such as:

“BEAZ at work is a study of comic intensity!”  -The TENNESSEAN

“Beaz is always a home run guest on our show! Our listeners can’t seem to get enough of him!”

Killer Beaz has his own, unique brand of hard hitting, "Laugh out Loud" – “Laugh A Lot” comedy.  Beaz delivers a high-proof, high edgy, and “everyman” style humor that appeals to any audience.  See him on television, hear him on the radio, see his stage performance live...you'll be "Stung for Life!"  Tickets are available at killerbeaz.com and dinner, show, and room packages are available at the Johnson City Holiday Inn Conference Center, call 423-282-4611 for more information.

Valentine’s Day Dinner for 2 with Tickets to Killer Beaz $110.00 per couple

Dinner, Show and Overnight Package with complimentary Bottle of Champagne, Breakfast Buffet and Noon checkout on Saturday  $198.00 per couple.

Unless VIP, Tickets are General Admission
No Refunds 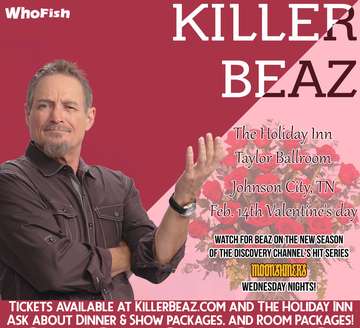