THIS EVENT HAS BEEN RESCHEDULED FROM MAR 20TH TO APR 24TH

LIMITED SEATING DUE TO CAPACITY RESTRICTIONS

Comedian Killer Beaz is currently starring in his fifth season of the Discovery Channel’s hit series, “Moonshiners”, and returning to his comedy tour of the country as COVID restrictions ease.  Beaz is about to release his new Audio/Video project, "The Official Bootleg”, and is soon to release an upcoming video series of clean comedy, “Killer Beaz PRESENTS” featuring the standup of Beaz and outstanding comics handpicked from all over the country.  Killer Beaz will be performing at The Cedar Street Social Club in Mobile, Alabama, Saturday, April 24, 2021 at 6:30PM & 8:45.  Tickets and information are available through KillerBeaz.com.

With many thousands of radio, television and stage appearances, Beaz has been entertaining audiences for over three decades.  He is an award winning artist, and has been signed with both Sony and Warner Brothers Records, and received reviews such as:

“Killer Beaz has a universal appeal that makes him a crowd favorite!” – SHOWTIME/Reno, NV

Killer Beaz has his own, unique brand of “Hard Hitting” – "Laugh out Loud" – “Laugh A Lot” – “HI-PROOF” –  “High Energy” –  “Everyman” style humor that appeals to any audience.  When asked, Beaz says about his shows, “I love the art of stand-up comedy! Having been given the opportunity to make people laugh and smile for all these years is truly a blessing!

See him on television, hear him on the radio, see his stage performance live...you'll be "Stung for Life!"   The show is at The Cedar Street Social Club in Mobile, Alabama, Saturday, April 24, 2021 at 6:30PM and 8:45PM.  Tickets and information are available through KillerBeaz.com.

SEATING is GENERAL ADMISSION if not VIP TICKETS
NO REFUNDS 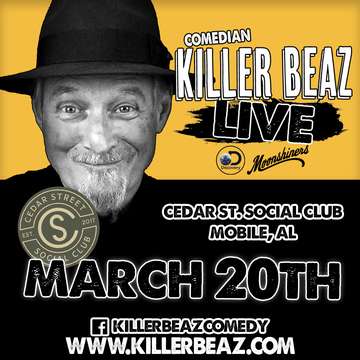