Comedian Killer Beaz from the Discovery Channel’s hit series, “Moonshiners”, is bringing some of his buddies from the show along with him for a series of comedy shows called, “Comedian Killer Beaz Presents The Moonshiner Mash In".  The show will feature stand up comedy and Moonshiner mayhem on stage with Beaz and his Moonshiners buddies, Mark & Digger, JB Rader and Kelly Williamson.  They are calling it “The Mash In”.  Killer Beaz and his Moonshiner friends will be performing at The Adventure Distilling Co. in Cosby, TN, May 22, 2021 at 7:00PM.  Tickets and information are available through KillerBeaz.com.

Beaz is about to release his new Audio/Video project, "The Official Bootleg”, and is soon to release an upcoming video series of clean comedy, “Killer Beaz PRESENTS” featuring the standup of Beaz and outstanding comics handpicked from all over the country.  With many thousands of radio, television and stage appearances, Beaz has been entertaining audiences for over three decades.  He is an award winning artist, and has been signed with both Sony and Warner Brothers Records, and received reviews such as:

“Killer Beaz has a universal appeal that makes him a crowd favorite!” – SHOWTIME/Reno, NV

Killer Beaz has his own, unique brand of “HI-PROOF” – “Hard Hitting” – "Laugh out Loud" – “Laugh A Lot” –   “High Energy” –  “Everyman” style humor that appeals to any audience.  When asked, Beaz says about his shows, “I love the art of stand-up comedy! Having been given the opportunity to make people laugh and smile for all these years is truly a blessing!

See him on television, hear him on the radio, see his stage performance live...you'll be "Stung for Life!"   The show is at The Adventure Distilling Co. in Cosby, TN, May 22, 2021 at 7:00PM.  Tickets and information are available through KillerBeaz.com.

All other tickets General Admission
18 & Up 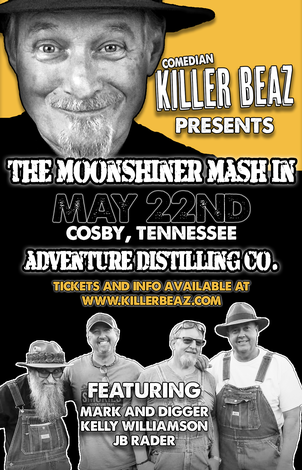