The Racky Thomas Band has been a torch bearer for the Boston Blues Scene since it's formation in 1995. Racky is an eclectic blend of blues and country blues with tinges of gospel and roots music. The band has released four critically acclaimed, independently produced CD's, including their most recent efforts: Hard Travelin' & Goin' Home. The band makes regular club and festival appearances, opening for such luminaries as Luther 'Guitar' Jr. Johnson, Ronnie Earl & Susan Tedeschi.
Racky Thomas was the highlight of 2018 The White Mountain Boogie & Blues Festival when he shared the stage with his Travelin' Medicine Show Revival Band and Special Guest Ilana Katz Katz.
Listen to samples of his music- http://www.cdbaby.com/cd/rackythomas

Ilana Katz Katz ilana Katz Katz has been hailed as “a rising star with her own blend of Blues and old-time Appalachian fiddling.” Ilana began as a busker in 2008, playing the crowded platforms of Boston’s subway stations. After a chance meeting with Ronnie Earl at a Billy Boy Arnold concert in 2013, Ronnie invited Ilana to sit in with him at an upcoming show. He subsequently took her under his wing, offering to accompany Ilana on her 2014 debut record, showcasing her as his guest in many shows around Boston and New York.

Her distinguished signature Blues violin and singing soon had her guesting with a who’s who of Blues musicians. Her second record featured NY Blues Hall of Famer Bobby Radcliff and multi-grammy nominated Cedric Watson. When she isn’t touring and performing ‘above ground’ – you can still find Ilana in the subway – playing her fiddle and serenading passersby with her own brand of Blues – including some jazzy scat singing in sync with her fiddle. She loves ‘bringing music to the people.’ She is known as a versatile, improvisational musician, equally comfortable performing solo, leading a band, or lending her fiddling prowess to bands in theaters, clubs, and festivals. She plays a lot of blues, but is also known for her Appalachian fiddlin’ and some rock ‘n roll violin as well. 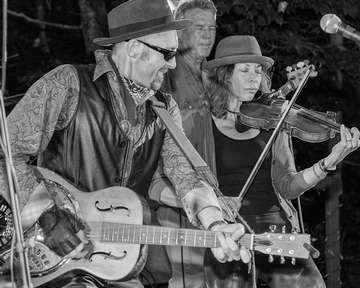