Two of America's premiere singer/songwriters have joined together to bring a memorable evening of award winning original songs to audiences throughout Montana.

Taken collectively, these "matadors of the metaphor" have had their work featured throughout the entire tapestry of American Music Media.

Tim Ryan has had a successful career as both songwriter and artist, scoring a top ten hit with his first release Dance In Circles. Tim's original songs have been recorded by George Strait, Randy Travis, Ty Herndon, Deana Carter, Red Steagall, Don Edwards, and Phil Vassar, who scored a #1 hit with Tim's song "The Last Day of My Life". Another original, "Golden Harvest", was named Song of the Year by Farm Journal and American Folk. His concert "My Grandfather's Fiddle", recorded live in Missoula at the Dennison Theater with the Missoula Symphony will soon be featured on National Public Television. Tim toured for several years with the Mission Mountain Wood Band and wrote several of the songs for their two latest CDs. 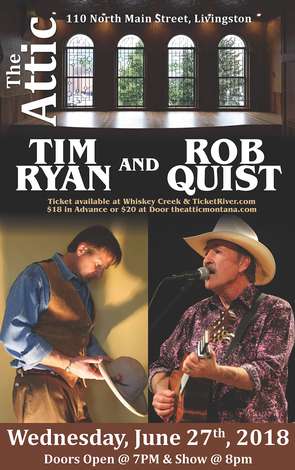