TUMUA, Time to Laugh will be held at Craig Ranch Ampitheater on May 21,2022. It is an all-ages event, and everyone must purchase a ticket. Doors open at 6 pm and the show starts at 7:30 pm. No re-entry, No outside food and beverage allowed and No refunds. Beverage stands is Cash Only. ATMs will be available on site.
About Tumua: Tumua Tuinei is one of Hawaii's top and hottest comics! Tumua has been doing comedy in the islands for five years.  Recently he sold out 29 consecutive shows since December 2020.  Including three SOLD-OUT Shows at The Blaisdell Concert Hall in Honolulu, Oahu.  The local boy is also a former University of Hawaii Football Player.  While at UH, Tumua found his passion for stand-up comedy through a comedy class.  His inspiration for his material comes from his local family and the hilarious situations that he experiences on the daily basis. 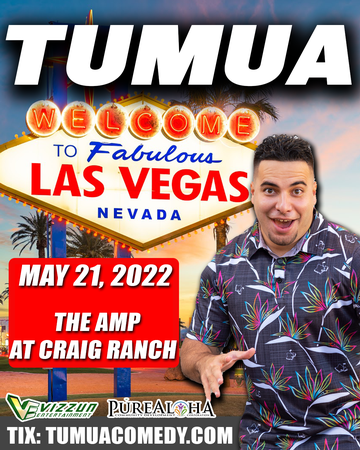