THE HISTORY OF THE ESSENCE OF WHITNEY

It began back in 2002 when I began performing at various venues in the Palm Springs area. I quickly became known as the singer who looks and sounds like Whitney Houston and I am constantly being approached to do Whitney look alike/sound alike performances, which I have always graciously declined. About a year after Whitney’s passing, a great number of my supporters, fans and clients earnestly began urging me that "now is the time to do a Whitney Houston Tribute.” Even my husband, Chris (the skeptic), expressed to me that I should earnestly pray about it because he, too, felt that it was time. I did not want to commit it to prayer because I was afraid of the answer. My thought was as long as I am unaware that I am supposed to do this, I can continue to say no; but if I pray about it and the Lord says "yes", then I can't say no.  The thought of doing a Whitney Houston tribute concert terrified me because she has huge shoes to fill; the numerous power ballads and #1 hits she sang felt a bit too much for me. However, my public thought differently...and so did the Lord. So here I am, being obedient to the God that both Whitney and I serve On October 18th and 19th of 2014, we debuted “The Essence of Whitney” tribute concert at the Indian Wells Theatre in Palm Desert, California. I was honored and privileged to work with Chaka Khan’s Musical Director as well as many musicians who actually toured with Whitney. The critics loved it. The fans loved it.  I loved it. It was a tremendous collaboration of effort and talent, and I realized I could, in fact, honor the legacy of Whitney Houston.

The reviews poured in and the comments were overwhelming:  “tremendous”, “otherworldly”, “amazing”, “incredible”, “phenomenal”, and “magical”.  I can only say that I have the best fans in the world!

Your support and love is so appreciated and I look forward to seeing you in Las Vegas on September 9, 2017! 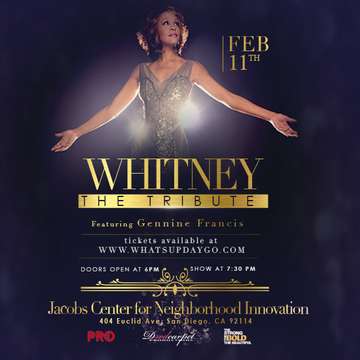