Don't miss this opportunity to be the proud owner the this 2012 White VW Tiguan. This car once belonged the Olympian and Whitefish native Maggie Voison. The car valued at $6,310 by CarFax.

Voison was selected for the U.S. Olympic team to compete in the women's slopestyle event at the 2014 Winter Olympics. Unfortunately, she fractured her right fibula above her ankle, and was unable to compete. During the 2013–14 FIS Freestyle Skiing World Cup season, Voisin finished in fourth in events in both Cardona, New Zealand and Copper Mountain in Colorado. At the 2014 Winter X Games, Voisin won the slopestyle silver medal, becoming the youngest skier to medal in X Games history.

Having turned 15 less than two months before the opening of the Sochi Olympics, Voisin would have been the youngest American to compete at the Winter Olympics since 1972. 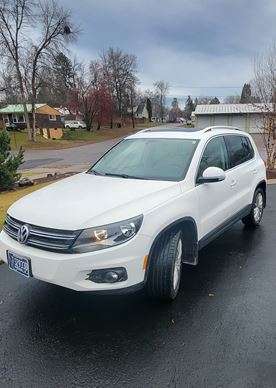