Jason Boland and the Stragglers at the Silver Spur

The Silver Spur Arena in Belgrade, along with VIP Productions, is proud to welcome Red Dirt Country recording artists, Jason Boland and the Stragglers on Friday, May 16, 2014 at 8PM.

It’s admirable when a musician gets back to his roots, there’s no questioning that. But in a lot of ways, it’s even more admirable when an artist has no need to do that – having never lost touch with those roots in the first place. Jason Boland falls squarely into the latter category, having spent the better part of the last 15 years entrenching himself in the so-called “red dirt” of his native state of Oklahoma and adopted home in Texas and while spreading his musical branches to cover a remarkable amount of territory.

“I’ve always thought it was important to keep one foot in tradition and the other pointed in the direction you want to go,” says Boland. “I didn’t invent the G chord, so I’m standing on the shoulders of the giants that did, and on the shoulders of some great songwriters that have come before me. I’m using an old stencil, but adding my own colors.”

On their new studio album, Dark And Dirty Mile, co-produced by Boland and Shooter Jennings , Boland and his compatriots use a wide array of hues to illustrate 11 songs of rejection and redemption, dark clouds and silver linings, all assembled in the rough-hewn manner that’s earned him an ever-growing fan base – a following that’s snapped up more than a half-million records over the past decade and change.

“The t-shirt sellers’ love that phrase ‘red dirt,’ because it’s so simple,” says Boland. “But it fits. It was coined by the people making the music – rust in the ground, blood in the dirt. It’s real and it’s where I come from – and what I refuse to give up, no matter what.”

Tickets are available online at www.ticketriver.com for $15 in advance and $20 at the door. 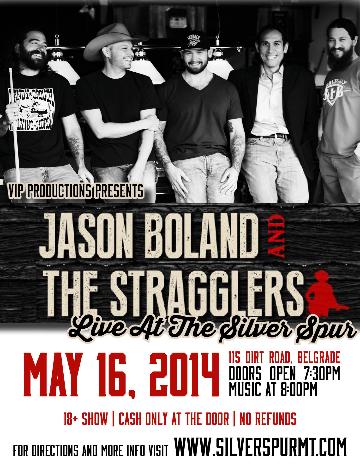