The Professional Bull Riding Touring Pro Division is returning to Big Sky, Mont., on July 30 and 31 at Big Sky Town Center, where the country’s meanest bulls will be bucking the world’s best riders.

Last summer’s event, in only it’s third year, won the Touring Pro Division Event of the Year, as chosen by the bull riders at the Built Ford Tough Series World Finals in Las Vegas, Nev.

This year’s event is presented by the Yellowstone Club, Big Sky Resort, Moonlight Basin, and Spanish Peaks Mountain Club. It includes two nights of bull riding with 40 elite riders and 80-90 world-class bulls. Riders will vie for a $40,000 added purse, with the champion taking home $20-$25,000. The top four places in each of the three rounds will pay out.

Round one will be held July 30 with round two and the championship round on July 31. The aggregate score from the first two rounds will determine the 10 riders competing in the championship, on 10 of the toughest bulls.

On both July 30 & 31, the evening’s top rider will be given a bonus ride option with funds raised by a 50/50 raffle. If he can hang on for eight seconds, he'll split the pot with the winning ticket holder. If he gets bucked, half the money will be donated to local nonprofit Blue Water Task Force and the other half will roll over to next year's bounty.

Each night of competition will be followed by a free concert in Town Center, with Montana’s premier Pink Floyd tribute band Pinky & the Floyd performing July 30, and local country rock band Bottom of the Barrel playing July 31.

A Calcutta auction will be held in the Golden Buckle tent at 5:30 p.m. both nights, bringing in cash for area nonprofits. The forty riders will be split into eight teams of five, with each team auctioned off to the highest bidder. All the money will be pooled and the top scoring team will pay out 70 percent, the second team 20 percent, and third team 10 percent. That money is split in half between the winning bidders and this year’s receiving nonprofits, Big Sky Community Corp. and Yellowstone Park Foundation.

Other nonprofits benefiting from this year’s PBR include the Big Sky Fire Department, Gallant Chance Ranch, and the Blue Water Task Force.

Golden Buckle Tickets - $150: Golden Buckle Tickets include a separate entrance and parking area with preferred seating. A tent with food catered by the Corral will be open prior to the event with a hosted happy hour from 5 to 7 p.m. and a Calcutta event charity auction (proceeds to benefit the Yellowstone Park Foundation and Big Sky Community Corporation). Golden Buckle ticket holders can also have a meet and greet autograph session with riders and behind the chute tours during the event.

Kids 6 and under - $10: Both Golden Buckle and General Admission tickets are $10 for kids ages 6 and under. Infants do not need tickets. Proceeds from kids tickets sales will be donated to Gallant Chance Ranch.

RAIN OR SHINE.  ALL SALES ARE FINAL. NO REFUNDS. 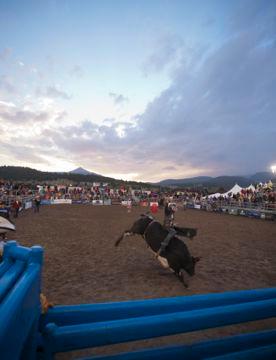