Patrick Williams is an anointed comedian and musician hailing from Portsmouth, Virginia.  Growing up in church, Patrick saw the need for entertainment that did not mirror the vulgar, degrading comedy so prevalent in society.  It was from this burning desire--and his naturally vibrant persona--that his signature character Peaty Ray-Red was born.

Since 2003, Peaty Ray-Red has appeared in stage plays, church events, and parades.  Whether on a YouTube video or a TV show co-host, Peaty Ray-Red's comedic personality delivered laughter for the hardest of heart and spiritual healing for the downcast soul.  At any event--from family reunions, parties, special events, church functions--Patrick uses Peaty Ray-Red to find humor in everyday life.

As God increased his platform, Patrick began performing both locally and in areas ranging from North Carolina to Texas.  He has grown exponentially over the years and has opened for celebrity gospel recording artists such as Tamela Mann and Tye Tribett. He recently performed in an arena for over 10, 000 people at the Ted Constant Convocation Center. Seeking to strengthen his natural skills, he currently studies acting at The Actors Place under Keith Flippen.

Patrick truly lives out his purpose every time he hits the stage, as he "lives to make the world laugh."  His wonderful wife since 2007, April Williams, actively supports and shares in this passion. http://www.peatyrayred.com

Vernard T. Hines "aka" The Laugh Therapist performs all over the world! Hilarious, clean, entertaining comedy. He is a father of 4 and is blessed to be Married to Latricia “Trish” Hines. He is a 20 year Iraq war veteran and a supporter of the wounded warrior project. He is a partner at "The Mount" in Chesapeake Va under the leadership of Bishop Kim W. and Elder Valerie Brown.

I am not ashamed to say that I suffer from P.T.S.D Post Traumatic Stress Disorder and that "The Laugh Therapist" was birthed from talking to a friend about my encounter with a therapist after returning from the Iraq war. "He asked me what got you through? and I said God and Laughter thus The Laugh Therapist was birthed. I learned I was using Laughter to hide pain of things in my childhood and as well as things I had experienced while in the Iraq, instead of dealing with the issues I would always just laugh it off. I never dealt or confronted issues I only ran from them. This carried over into every area of my life, laughter really kept me from committing suicide and thus Laughter was been and will continue to be my Therapy.

Laughter is the most beautiful and beneficial therapy God ever granted humanity. Hope and laughter are joined together. Hope in God and His Word fills the afflicted soul with such inward joy and consolation, that it can laugh while tears are in the eye, sigh and sing all in a breath ---it is called "The rejoicing of hope". Laughter is the closest thing to the grace of God!!! Keep your hope in God and "Keep laughing no matter what" www.thelaughrapist.com

I'M A SUPPORTER OF THE WOUNDED WARRIOR PROJECT "I MEAN IT" 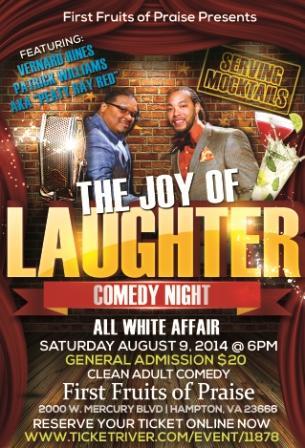