The Silver Spur Arena in Belgrade, along with VI Productions, is proud to welcome Texas country recording artist, Curtis Grimes on Friday, April 10, 2015 at 9PM.

To hear Curtis Grimes sing is to take a trip through the heart of country music. A Texas native, Grimes was raised on a steady diet of George Strait and Alan Jackson, and possesses the everyman charm of both his heroes, along with a refreshingly mature voice that -- in an era of country raps and pop beats — truly stands out.

Deep down Grimes is a true student of traditional country music. As a true showman, Curtis has proved himself in front of massive audiences like opening for Kenny Chesney and Toby Keith. Also, Curtis was chosen by Cee Lo Green for his team on season one of the NBC TV Show “The Voice.”

For the ever-busy performer, it’s all about his work ethic, a sense of pride instilled in his family by his great grandfather. In 2014 the hard working performer recorded his first fully produced studio album, “Our Side of the Fence,” produced by fellow Texan singer/songwriter Trent Willmon.

Grimes got his second #1 single of 2014 with the title track to “Our Side of the Fence.” The song spent two weeks at the top of both of the Texas charts. Grimes hit his stride with his first number one single “The Cowboy Kind” in early 2014. He had previous radio success with “Irresponsible,” “Smile” and “Home to Me;” that appeared in a national commercial for Supercuts.

The small-town boy has already achieved a lot in a relatively young career but the hardworking Grimes is set to play over 200 shows in 2014 all around the United States.

Tickets are available at Cactus Records in Bozeman, at the 49er Diner in Livingston; or online at www.ticketriver.com for $15 in advance and $20 at the door. 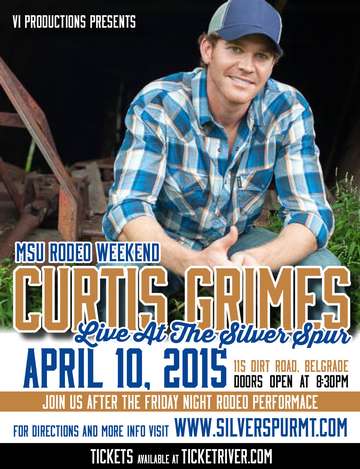