Wolfstock brings you the best musical talent in the  Southern Illinois region. This will be our 4th year and we believe you will agree this is our best Wolfstock to date.

*   Not listed in order of appearance

Eye of the Needle

Details about this year's acts:

Gene Hood - Gene is a Mt. Vernon native who has performed over 3000 live shows from 1977 until 2000. He has performed from Mt. Vernon to L.A. to New Mexico to Seattle and areas in between. Since 1977 Gene has been writing, recording and performing music people love. Gene has opened for large national acts such as Jethro Tull. He now calls Seattle home. Gene has taken several years away from performing live. We are blessed to have him make the trip back home from Seattle for what may well be his last show ever in Mt. Vernon, Illinois. Gene has just recorded his 4th studio album which he will have available for sale at Wolfstock. This is a "must see" performance.

Growing Oldish - Has been referred to as "Mt. Vernon's best coverband" by T-10 owner Chris Campo. This band features some of the best of a new generation of musicians along with one seasoned veteran on the drums. They are making a rare live performance, one of only two shows since their last Wolfstock performance in 2010.

Pumphouse Monster - This band brings heavy blues to a level unmatched by any act in the region. You won't believe your ears. Blues at its finest.

The History of Bob Troutt and Wolfstock

Wolfstock is a music festival held to honor the memory of our friend Bob Troutt (a.k.a the Wolfman). Bob was a Green Beret in Vietnam and a well-known local artist. He painted the murals found in the lobby of our Granada Theater and in the lobby of the Jefferson County Courthouse. Bob was known world-wide for many of his commercial artworks featured in Soldier of Fortune and other publications. Examples of his artwork can still be seen at his websitehttp://greywolf-graphics.com/

Bob was a hero of the common man. He wanted to lift everyone around him to be all they ever dreamed they could be. Bob could find the good in you and would make sure it shown through.

Bob loved all forms of art. He had a special love of local music. It was not at all uncommon to see Bob at local shows drawing or painting. His artwork adorned the covers of albums of local artists such as Gene Hood's "Out of the Clouds" album. Bob held many outdoor parties at his farm featuring local music.

Our 2011 Sponsors will be announced soon.

SATURDAY, SEPTEMBER 17 All ages welcome! Must be 21 to drink or possess alcohol. Onsite security will be provided. Tent camping suggested.

Campers and RVs will be allowed on first come first serve basis. No generators after 2 am. No campfires. Check-out is noon on Sunday. You must present your ticket for admission. Arm bands must be worn at all times if you want to come and go. No refunds. Your ticket is your rain check.  Unruly pets and unruly owners will be asked to leave. Food, Beer, Soda and Water will be available for sale at the event. No coolers allowed outside of camping area. All facilities are outdoor only. No admittance to home on-site. No bottles please.  Abusive behavior will result in your removal without a refund. Everyone here is going to have a good time whether you like it or not!

Wolfstock was created to honor the memory of our friend Bob Troutt (aka. The Wolfman).  It is the fundraising event for the Bob Troutt Memorial Foundation which is a registered and legal 501c3 non-profit charity. Proceeds from this event will go to the American Cancer Society and an art scholarship in Bob's name. Don’t expect a funeral style gathering though.  Bob would want us all to have fun and jam. That’s what we’ll do! 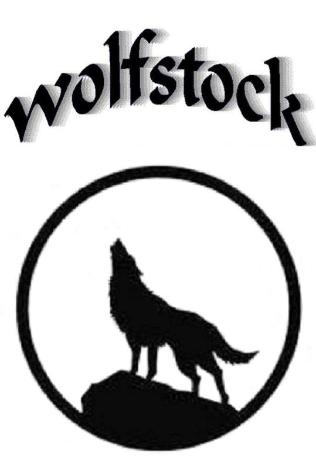