Dave Wickerham: Music from the Movies

Bringing the unique art form of the theatre pipe organ to Indianapolis, theatre organist Dave Wickerham will bring back memories of the Paramount Music Palace as he plays  “Music from the Movies,” a show featuring great American standards uniquely interpreted by one of the most versatile instruments ever designed—the theatre pipe organ. The concert will take place on Sunday, July 10, 2011 at 2:30pm at Carl Wright Auditorium, Manual High School. For more information, contact the Michael Fellenzer at (317) 251-6962, or visit www.cicatos.org.

STUDENT TICKETS ARE FREE AT THE DOOR

Dave Wickerham was born in Encino, California in 1962. He has established himself as one of the most accomplished theatre organists in the US, having toured and recorded extensively here and abroad. Aside from touring, he has held many prestigious positions at churches and entertainment venues across the country, including long-term positions at the Organ Piper Palace in Milwaukee and the Fiesta Casino and Hotel in Las Vegas.  He currently holds the position of curator and organist-in-residence at the extravagant Milhous Collection in Boca Raton, Florida.

Those familiar with the now-gone Paramount Music Palace in Indianapolis are no strangers to the theatre pipe organ. Also known as the ‘Unit Orchestra,’ the theatre organ is a type of pipe organ equipped with characteristically orchestral voices and can easily perform a wide variety of music, ranging from classic Broadway scores to the music of the Beatles and more. They were originally developed to accompany the silent films of the 1920s. Indianapolis is home to a small handful of remaining instruments, located in venues such as the Hilbert Circle Theatre, Warren Performing Arts Center, and Wright Auditorium at Manual High School.

The Central Indiana Chapter of the American Theatre Organ Society is a nonprofit organization dedicated to the preservation of a unique American art form — the theatre pipe organ and its music. The objectives of the Central Indiana Chapter and the American Theatre Organ Society are to preserve, maintain, restore and promote the surviving theatre pipe organs from the 1920s and 30s, as well as to install restored theatre organs in other suitable venues in Central Indiana. This effort also promotes the use, understanding and enjoyment of these unique instruments by today's generation as well as future generations. 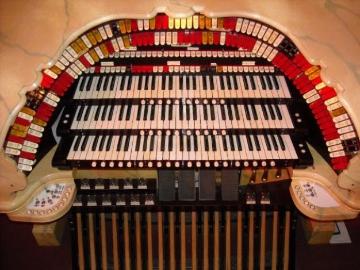