Speak Out to Reach Out Banquet

The Michael Walton Foundation with Diversity Lodge #330 is holding a banquet aimed at raising funds for the foundation's Speak Out to Reach Out Program.

Developed in 2001, the Speak Out to Reach Out tour was the vehicle that inspired Michael Walton to launch the Michael Walton Foundation. It began with Michael visiting Washington, D.C.; Prince George’s County and Montgomery County (Maryland) High and Middle Schools to provide a message of hope and determination to hundreds of students at a time. Over the years, it has established a strong following and has flourished into one of the most sought after programs in the Washington, D.C. metropolitan area reaching in excess of 130,000 students sense its inception. The tour currently possesses an all-star line up of celebrities and professionals, in addition to Michael, united to reach thousands of young hearts throughout the year. Each presenter chronicles there journey to success in a way that presents the children with an expectation of accomplishing goals and dreams in the same manner. The tour is entertaining yet informative, fun yet life altering and is designed to decrease drop out rates, raise test scores and boost self esteem!

This banquet will include dinner, dancing and Laron Profit (Assistant Coach for the Orlando Magic) as the guest speaker. 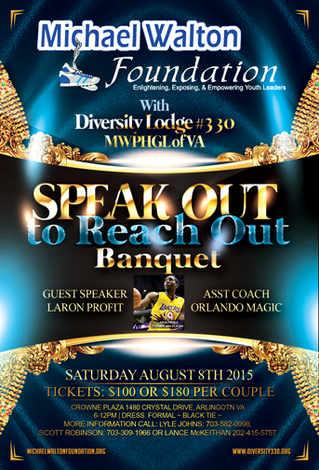