Eilen Jewell's new release 'Queen Of The Minor Key' is off to a great start with tons of rave reviews. She is currently #23 on the new artist chart, #14 on the folk chart and #77 on the indie charts. NPR states, “She's got a sweet and clear voice with a killer instinct lurking beneath the shiny surface.” To say she is a folk artist is a vast understatement. This woman can really belt out the vocals and her backing band is full of straight up shredders. Don’t believe us? Come down to The Filling Station on Wednesday August 3rd after the Bite of Bozeman and find out for yourself.

Her latest release is the battered cassette jammed in the tape deck of the getaway car, the music Ida Lupino cues up on the roadhouse jukebox as she counts the till after close. This is an album with a heart of burnished gold and enough stories to keep even the rowdiest crowd hanging on her every word. Though its long shadows and dark corners make her kingdom feel intimate, her sovereign domain stretches as far as the imagination. Its denizens seek refuge in padded rooms, abandoned automobiles… and strong spirits. They defend their territory by any means necessary: weird voodoo, sawed-off shotguns, and broken bottles.But beware, savvy observer. There is more to Eilen Jewell than meets the ear. Do not confuse the singer and her songs. The drama and darkness that give Queen of the Minor Key its gritty texture are in short supply in the Boston-based songwriter's personal life. And in a curious twist, these fourteen originals actually took shape in a sunny, idyllic location that contrasts strikingly with the album's moody, film noir atmosphere.

In August 2010, Jewell headed to a tiny cabin in the northern Rockies. Her temporary abode had no running water or electricity, and sat at the end of a winding dirt road. Wild elk would graze in the surrounding meadows while she worked. When it was time to unwind, she availed herself of a nearby hot springs. A dilapidated truck she found on the property even made its way into the album artwork.She had no set game plan, and her sole objective for the new material was refreshingly modest (or incredibly daunting, depending on your point of view). She demurs, "Every time I make a record, I want it to be even more real, more heartfelt, than the one before it. I want the slow songs to be slower and the fast songs to be faster."

Drawing on a connoisseur's love of roots music and a writer's eye for detail, Jewell fashions her musical vignettes with impressive economy. Each turn of phrase and chord change is executed with an élan that belies the measured precision behind it. Queen of the Minor Key is also the first Eilen Jewell album to feature a significant number of guest players, even as she continues to work in close consort with her longtime trio of drummer Jason Beek, guitarist Jerry Miller (of J. Geils fame…this guy is one of the best guitarists out there…epic!), and upright bassist Johnny Sciascia. Zoe Muth and Big Sandy (of Big Sandy & His Fly-Rite Boys) both contribute vocals. Since her official 2006 debut, Boundary County, Jewell has surveyed a wide range of traditional musical styles, from the folk and jug band leanings of her early recordings, through an album-length homage to Loretta Lynn and the country gospel of her work with The Sacred Shakers, right up to 2009's Sea of Tears, which bristled with the electricity of '60s UK garage rock and Chicago blues. Queen of the Minor Key draws on everything from classic country (the fiddle-driven "Reckless"), to early R&B (the shuffling "Hooked"), with an emphasis on sounds from the seamier side of the tracks. With dirty sax riffs and low-slung guitars, the instrumentals that bookend the album—"Radio City" and "Kalimotxo"—evoke the bump-and-grind exotica of vintage Southern California suburban saloons.

Yet on the flipside, Jewell imbues slow, jazzy numbers like "I Remember You" and "Only One" with torch and tenacity that linger long past last call.Eilen Jewell is the Queen of the Minor Key. Sad songs are her wealth and finery. Lend her your ears, and you will quickly hear why her humble subjects admire and adore her more with each passing year. “Dark and haunting...but alluring just the same…Give me more of that voice.” states Pop Candy of USA Today. The New Yorker exudes, “Jewell embellishes the classic Nashville vocal approach with appealing measures of blues, pop, and jazz.” Opening the show at 9 pm will be Kevin Koutnik out of Helena who has begun carving a nice niche of fans in Bozeman. Then we are very excited to welcome back Tumbledown House with their FULL band!

They should be in full swing by the time you amble down from the festivities on Main Street. Do not miss this show by Compound Productions. If you want that spine tingling effect then this show is it. She is going places and will probably be playing the Emerson next time through.

Get on down to Cactus Records now and get your tickets for a mere $8 or $10 at the door. Check out her videos at www.eilenjewell.com and you will see how amazing her band truly is! 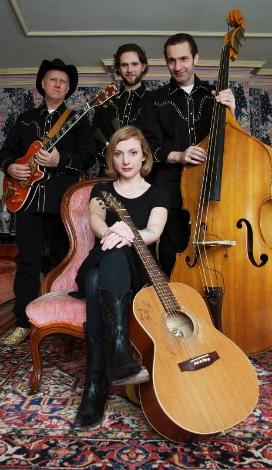