Coming to Flint, Michigan for ONE NIGHT ONLY - Casey - 30 Years Later!

Casey, the sassy and smart character from the Basket Case films is back for one night only to fill you in on what she's been up to since the Bradley boys left her life. Join Casey and her, uh, ladies, for a night of stories and fun as she reminds you why she was so important in the life of Duane and Belial.

For one special night the Flint Horror Convention presents a celebration of the film Basket Case during its 30th Anniversary. On April 7th fans will be able to relive the laughs, the shocks, and the gore of the film as it is screened locally for the first time ever. After this special screening actress Beverly Bonner will present her show Casey - 30 Years Later! Casey is a short live show full of the risqué humor from the film and which serves as a perfect way to catch up with a beloved character. Join Casey and her 'Ladies of the Night’ for an evening you'll never forget. After the show join Ms. Bonner for a Q/A session and find out more about her acting career, her comedy, and her life since Casey.

Chesaning's own Beverly Bonner returns to Mid-Michigan with her beloved character Casey for a celebration of the 30th Anniversary of cult horror classic Basket Case. Beverly Bonner has become a mainstay for Basket Case director Frank Henenlotter and has appeared in such films as the Basket Case trilogy, Frankenhooker, Brain Damage, and his most recent film, Bad Biology. She is a comedian, actress, playwright, producer, and director and has become a fan favorite at horror conventions and appearances over the years.

Consider yourself cordially invited to celebrate the 30th Anniversary of one of horror's timeless classics and join Casey for a night of stories that would make Belial blush.

VIP tickets will give the bearer -

Check out the official CASEY website for more details! 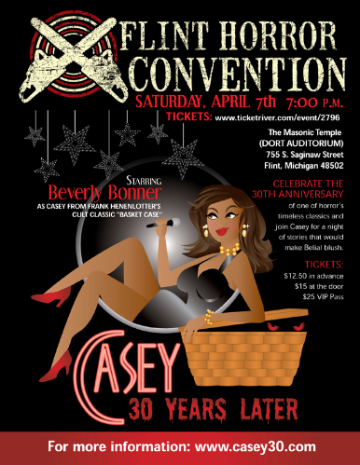