Online sales have ended. Tickets available at the door.

Railroad Earth certainly thrives in a live setting, as their stunning 2006 live album, “Elko,” is certian proof of that. It’s no secret that improvisation is one of the RRE’s big strengths. But what really sets them apart is the strength of their songwriting. It was the strength of those first five songs that got them on the bill at Telluride. And they’ve only gotten better since then.

Indeed, Railroad Earth’s music is driven by the remarkable songs of front-man, Todd Sheaffer, and is delivered with seamless arrangements and superb musicianship courtesy of all six band members. As mandolin player John Skehan points out, “Our M.O. has always been that we can improvise all day long, but we only do it in service to the song. There are a lot of songs that, when we play them live, we adhere to the arrangement from the record. And other songs, in the nature and the spirit of the song, everyone knows we can kind of take flight on them.” Sheaffer continues: “The songs are our focus, our focal point, they give the improvisation a starting point. The jams sort of ‘comment’ on the songs, and give them color. Some songs lend themselves to improvisation. They ‘want’ to be approached that way – where we can explore and trade musical ideas and open them up to different territories. But sometimes it is what the song is about.”

When the band does elect to “comment” on a song via an extended improvisation, they really cook – and have received the approval of no less than Grateful Dead bass player Phil Lesh, who knows a thing or two about jamming. In fact, Mr. Lesh even used the RRE members as the “Friends” in his Phil & Friends band, and learned to play some of RRE’s repertoire, blowing the group’s collective mind.

So: they can jam with the best of them, but they’re not a jam band. They’re bluegrass influenced, but they use drums and amplifiers (somewhat taboo in the bluegrass world). What kind of music is it then? Mandolin/vocalist John Skehan offers this semi-descriptive term: “I always describe it as a string band, but an amplified string band with drums.” Tim Carbone takes a swing: “We’re a Country & Eastern band! ” Todd Sheaffer offers “A souped-up string band? I don’t know. I’m not good at this.” Or, as a great drummer/singer/mandolin player with an appreciation for Americana once said: “Rock & roll!” 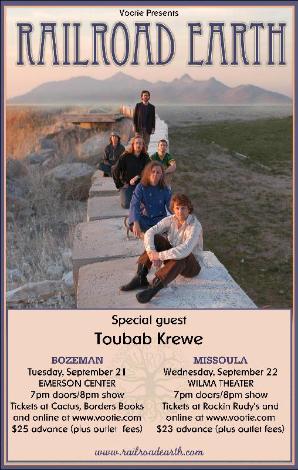