With special guest The Detroit Hammers plus many more industry friends and surprise guests.

Dick Wagner’s songs and lead guitar have been featured on more than 200 renowned albums, garnering more than 35 Platinum and Gold records, BMI songwriter awards, Emmy's and numerous prestigious international awards. (Currently nominated alongside Alice Cooper on the Official Ballot for the 55th Annual Grammy Awards by The Recording Academy in two categories. Their song is SOMETHING TO REMEMBER ME BY (Cooper-Wagner), and numerous prestigious international awards.) See http://www.wagnermusic.com/discography.htm

Legendary for his groundbreaking collaborations with Alice Cooper, Wagner was musical director, lead guitarist and co-writer of the icon’s biggest hits, including Only Women Bleed, You and Me, and Welcome To My Nightmare. Wagner was Cooper’s right hand man on such groundbreaking albums as, Welcome to My Nightmare, Alice Cooper Goes to Hell, Lace and Whiskey, From the Inside, and DaDa.

Together, Cooper and Wagner co-wrote the majority of Alice Cooper’s top selling singles and albums, including more than 50 songs featured on 57 Alice Cooper albums released worldwide. As a teenage musician living an hour north of Detroit Michigan, Dick Wagner enjoyed his first taste of “big time show biz,” when he was asked to play guitar as backup for some of his musical heroes, including Jerry Lee Lewis, Roy Orbison and Little Richard. Great balls of fire! The Michigan public first took notice of Wagner’s talent in 1964, when he formed the band The Bossmen, whose songs like Baby Boy were #1 radio favorites in Michigan.

Soon Wagner was writing and producing for other Michigan bands. In the late 1960s, as Wagner’s work became more complex and featured a harder edge, he formed the wildly popular band, The Frost, recording three Billboard charted albums and drawing enthusiastic crowds to hear songs like Mystery Man and Rock N’ Roll Music. Wagner moved to New York to form Ursa Major, a seminal rock band and power trio that recorded one, self-titled, defining album for RCA. The raw musical power and artistry of Ursa Major inspired a generation of rock musicians and remains an influential album for today’s musicians.

Little known factoid: the original Ursa Major lineup included Wagner on guitar and Billy Joel on keyboards, but dramas in Billy’s personal life intervened and he left the band.

Wagner’s guitar virtuosity captured the attention of Lou Reed, and he was invited to play on Lou’s European Berlin tour in 1973. Wagner assembled a powerhouse band including Steve Hunter and Wagner on dueling lead guitars, Prakash John on bass, Pentti Glan on drums and Ray Colcord on keyboards.

The live album, Rock N’ Roll Animal, recorded at the Brooklyn Academy of Music, remains one of the most celebrated and influential guitar albums in rock history. Lauded by Rolling Stone, Billboard, and the international press, Rock ‘N’ Roll Animal was described by renowned music critic, Robert Christgau: “This is a live album with a reason for living.”

Writer Joe Viglione, in his book, A Study of Lou Reed’s Berlin and Rock N’ Roll Animal Albums, describes the guitar stylings of Hunter and Wagner: “Steve Hunter and Dick Wagner were as potent a duo as Keith Richards and Mick Taylor, and the four make-up the “Golden Era” of both The Rolling Stones and Lou Reed, that period when the recordings were beyond magical…. Lou’s 9/1/73 show still rates as numero uno in my book, for presentation, drama, craftsmanship and sheer rock and roll energy.”

In September 2010, nearly 40 years after the release of Rock N’ Roll Animal, Gibson.com honored Dick Wagner and Steve Hunter among the Top 50 Guitar Solos of All Time, for their guitar performances on Intro to Sweet Jane. Amid the prestigious company of Jimi Hendrix, Eric Clapton, Jimmy Page, Jeff Beck and other renowned guitar greats, The Hunter-Wagner team appeared twice, with honors as well for their “ghost” guitar work on Aerosmith’s Train Kept A Rollin from their first platinum selling album, Get Your Wings.

In 1972, producer Bob Ezrin brought Wagner in to play lead guitar solos on Alice Cooper’s breakthrough School’s Out album. Uncredited at the time, Wagner’s guitar solos were attributed to the Alice Cooper band. The Cooper-Wagner songwriting collaboration began with I Love the Dead, released on Cooper’s Billion Dollar Babies album. Cooper and Wagner began a prolific collaboration that spanned several decades. Together, the Cooper-Wagner songwriting team wrote 7 out of 9 of Cooper’s Top 10 hit records.

Leaving Lou Reed in 1974, Wagner moved the entire Rock N Roll Animal band over to play with Alice Cooper. The first full album written and recorded by the Cooper-Wagner team, “Welcome to My Nightmare,” spawned a number of Top 10 singles. The Welcome to My Nightmare tour, with a road crew of more than 45 persons, private jets, technical wizardry, theatrical showmanship, and extravagant staging and lighting, became the biggest and highest grossing rock tour of its time. Shock rock was born.

With Wagner’s studio walls lined with gold and platinum awards, he writes with the observant eye of a world traveled artist. In the late 1980’s, Wagner was commissioned to write music by the San Antonio Commission on Child Abuse. Wagner’s poignant composition, Remember the Child, painfully reflects the pain of child abuse. Renowned author/lecturer John Bradshaw discovered the song and chose it as his theme for the Emmy nominated PBS special, Homecoming. The song has since become the anthem for tens of thousands who have been scarred by child abuse, and is a catalytic tool used by many therapists in helping their patients access their hidden suffering of childhood trauma. 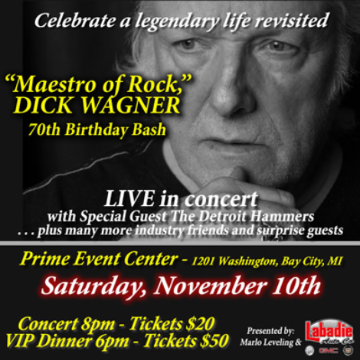