An Evening with David Wilcox

David Wilcox's 'Open Hand' was recorded in 7 days from start to finish in December 2008 on 2 inch 16 track analog tape. No computer tricks were used, all of the songs on this release were recorded live, just 4 human beings playing music together.  Very minimal overdubs were used, so most all of what you hear is exactly as it was played together by David and the other musicians live.  Dan Phelps produced and played guitar and keyboard, Jon Evans: bass guitar and upright bass, James McAlister: drums and percussion.

'Open Hand' is David's 16th release.  Since he performs solo acoustic almost exclusively, he is able avoid the common 8 or 10 week tour, preferring instead to strike a balance between traveling for shows and being at home in Asheville NC with his family.  It's more than just a good balance for his life, he compares the two worlds of touring and creativity at home as being akin to the in breath and the out breath - inspiration and expression.

David loves music for how it has tuned up his life.  More than just entertainment, music has been a compass to navigate a life worth singing about.  Some people describe the effect of what David does as if he were a mystic or a healer.  So here are three different views from Gary Jules, Elizabeth Lesser, and Brian McLaren of what David does with this simple sound.  First, Gary Jules describes the effect of David's musicianship. 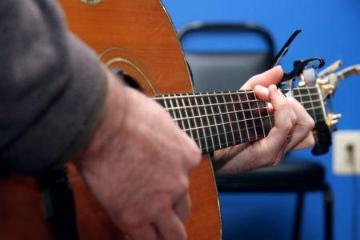