It's "Now or Never" to see Elvis Featuring Ryan Pelton.

After many past SOLD OUT shows in MT, ELVIS will appear one last time in Helena on Jan 14th at the Helena Middle School Aud. at 7:30pm. Elvis, Live in Concert stars Ryan Pelton and his 6 piece band The Difference, direct from Nashville. He is widely regarded as one of the world's best Elvis tribute artists, and now will launch his farewell tour in MT. Ryan just completed the filming of the movie "The Identical" with Ashley Judd which will be released next Fall.  Being noticed by the movie industry has been a long time dream of Ryan's. Now that he has this movie under his belt, he now wants to pursue a full-time acting career, so he is hanging up his black leather jump suit forever, after this one final tour.

Ryan has been exciting audiences all over the United States and on four continents performing with the Las Vegas Production Show "Legends in Concert", starring in movies including "Hound Dog" with Dakota Fanning, and appearing in commercials as Elvis. He is the only tribute artist to have been booked to perform at Graceland, Elvis Presley's home in Memphis, Tennessee. As Dick Clark said about Ryan Pelton, “It's Elvis!” Four years ago, Pelton appeared with Celine Dion on "American Idol" performing a duet of "If I Can Dream."

In his final live show, Ryan will take the audience on a journey through all the eras of Elvis Presley's am

azing career - from the raw edged fifties through the light-hearted movie era, to the electrifying Sixty-Eight Comeback Special, and of course the powerful Las Vegas years.  Ryan sells out venues all over the country," says promoter John Raymond. "You will want to get your tickets early for this final performance.  In the words of Elvis himself, 'It's now or never!'”

This performance is sponsored by KXLH TV 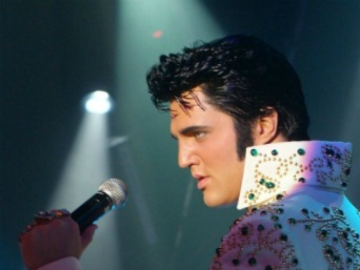