In his highly personal adaptation of the one-man-show by Sir Ian McKellen, James DeVita provides his audiences an intimate look into the conversational side of William Shakespeare.  It is a story about one person's journey towards meeting Shakespeare and discovering the beauty of words - and their potential - which began one night twenty-five years ago when he watched, with more than a little awe, Sir Ian MicKellen in Acting Shakespeare.

"A good one-man show leaves the audience wanting more, which is exactly what happens with James DeVita's satisfactory piece, 'In Acting Shakespeare.'"-AP The Big Story Review

Since seeing McKellen in 1987, DeVita says he's spent the past 25 years trying to learn to "make Shakespeare's language actually sound like a person talking." In his words, "I wanted to be kind of like the Gene Kelly of Shakespeare."

By sharing insights and humor from his never-ending journey toward honesty and understanding in performing the glorious language of Shakespeare, DeVita shines a light for all of us on The Bard's articulation of "the things we feel in our hearts but can't always express." -AP 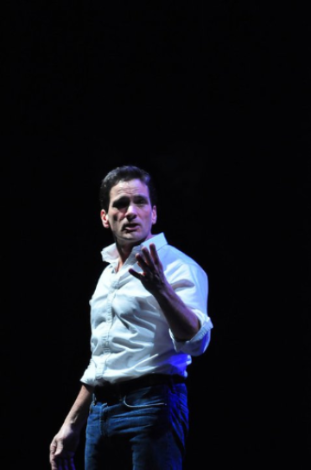