GA TICKETS $40 IN ADVANCE PLUS FEES

ON SALE MONDAY MAY 6TH AT CACTUS RECORDS AND WWW.VOOTIE.COM

American Kid, Patty Griffin’s seventh album, is her first album of mainly new material since Children Running Through in 2007. In between, she made the Grammy Award-winning Downtown Church (2010), her version of classic gospel (though it featured three original songs). She also became a member of Band of Joy, the group in which leader Robert Plant and his cohorts meld British and American folk, rock and spiritual music.

American Kid, much of which Griffin says “was written to honor my father,” returns to typical Patty Griffin territory, which is to say that it features a group of remarkably powerful, personal and unpredictable songs arranged and performed in a style that doesn’t entirely repeat anything she’s done on her previous albums while drawing on all of them. Yet Griffin’s catalog is among the most unified in modern popular music, because her singing is as unmistakable and inimitable as her songwriting.

Griffin has lived in Austin and recorded either in Austin and Nashville throughout her career (she released her first album, Living with Ghosts, in 1996) but American Kid is her first album whose music sounds stylistically rooted in Americana. “It was recorded in Memphis,” Griffin says, and adds with a quick laugh, “Part of the reason was the chance to get away from what I’d been doing.” The key to that was working with North Mississippi Allstars guitarist Luther Dickinson and drummer Cody Dickinson. The Dickinsons had played acoustic sets opening for Band of Joy and Luther gave Patty lessons on mandolin. “With the Dickinsons, you’re constantly seeing people who work to get away from what they’re used to.”

Craig Ross, responsible for the production of an earlier Griffin collection (2004’s Impossible Dream), co-produced American Kid with Griffin. Ross is perhaps best known for his guitar work with Lisa Germano as well as his own critically acclaimed solo albums. Griffin said she chose Ross because of his ability, as she describes it, "to get the ghost out of the machine." Ross plays -- usually guitar, but also bass, mandolin, baritone, omnichord and organ -- on all but two tracks on the album (the cover of Lefty Frizell’s “Mom and Dad’s Waltz” and the showstopper “Irish Boy,” which is just Griffin and her own piano playing).

The other prominent musical contributor, appearing on eight of the 12 tracks, is guitarist Doug Lancio, who has played on just about every Patty Griffin recording since Flaming Red, and produced some of them. Robert Plant sings on “Ohio,” “Faithful Son” and “Highway Song.”

The album’s lyrical focal point is Patty’s father, a high school science teacher who fought in World War II, lost his father young and his mother almost immediately after he returned from the war, lived for a time in a Trappist monastery, raised seven children, bought Patty Sgt. Pepper’s for her birthday and changed her life. Patty’s parents sing a duet on “The Impossible Dream” at the end of the track “Top of the World” from Impossible Dream. (They are credited as “Mr. and Mrs. Griffin,” no first names.)

Mr. Griffin’s impending death sparked the songs. But these aren’t songs about death, even though American Kid features ample reference to mortality. “Go Wherever You Want to Go,” which opens the album, was written “as I was getting ready to lose him. So it was really to honor him. Then a whole other story opened up—my father’s story started telling me a bigger story,” says Griffin, referring in particular to “Irish Boy,” her voice and piano solo number that’s the record’s emotional apogee, written about her dad in his glory, a soldier just returned to home and everything and everyone he loves.

“Irish Boy” proved particularly difficult to record. Griffin recorded several versions without quite capturing what she was feeling. Given that the lyric is not merely about her father, but written from his own perspective as a young man, that’s not surprising. But after every other track on American Kid was finished, she decided to give it a last try. That’s where she found this version, which ranges through the emotional turmoil of secrets told and untold, to find, in its almost but not quite matter of fact final notes, some peace. It is one of the outstanding vocals of her career. And not until a few hours later, Craig Ross reminded her, did Griffin realize that she’d finally found the song’s secret on St. Patrick’s Day .

The cover of Lefty Frizzell’s “Mom and Dad’s Waltz” presents a nakedly sentimental loving youngest child, not Griffin’s usual mode by any means. It’s a rendition at least as moving as Frizzell’s original 1951 hit, and the repetition of the song’s last words (“I love them so”) is a startling big moment on an album full of impressive singing, even by Griffin’s high standard.

But American Kid is thematic, not a concept album. “Faithful Son” might or might not be a picture of Patty’s dad, but not the harrowing “Wild Old Dog,” which considers that God might be a bull terrier abandoned in a field beside the interstate; “That Kind of Lonely,” which Griffin describes as occurring at a “kind of warmed over party” where the singer “stops being a being kid and finally decides to grow up”; and “Not a Bad Man,” the most powerful antiwar song she’s written, is about a soldier whose disaster is unmistakably the product of a war far more contemporary than her father’s.

There’s not a predictable moment on American Kid, a point reemphasized by the finale, “Gonna Miss You When You’re Gone.” It’s a combination of words and music, torch singing and bittersweet insight, a farewell to the father she loved and, perhaps, that world that’s been outgrown along the way. It’s a devastating combination of lyricism and intellect, passion and technique, a tightly controlled account of a broken heart. It’s not that it outstrips the other songs and performances Griffin’s created for American Kid. It’s that it fulfills them. 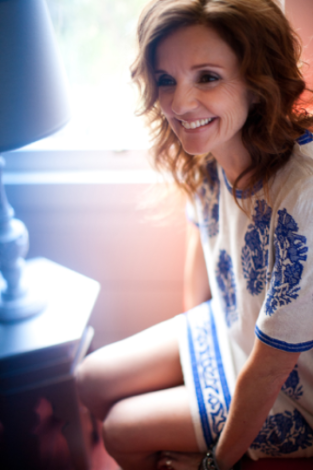