Check out this video of Front Runners in Action!

From the blacktop and concrete of Chicago’s southside comes Bittersweet & The B-Sides – a band formed in 2011 by former members of the infamous funk-rock group Slinky Styles. With a musical relationship that has spanned the better part of twelve years, Chuck Naegele and Anthony Barraco worked their fingers to the bone honing songs in their former band and after a brief hiatus are back on the scene with a batch of new songs, their latest work, a series of blues, jazz and rock originals, would later lay the foundation for what is now the band, Bittersweet & The B-Sides.

After the short lived success of his first band Chester, Scuba decided to pursue a solo act. Slowly but surely first building his collection of guitar pedals and then original songs, he has worked hard at polishing his act over the last 10 years. With the use of his various delay, harmony, and loop pedals, Scuba creates a full band panoramic sound during his live shows. His performances weave in between the layered sounds of psychedelic chaos and quiet, emotionally charged songs. Possessing a knack for storytelling, Scuba's songs tell the tales of heartache, frustration, and hope.

Singer/Songwriter Amy Gerhartz is a raw talent that blends Acoustic Pop, Rock, Folk and Soul. Traveling up and down the east coast, playing exclusive venues in New York City, Atlanta and Virginia, Amy is beginning to spread her music to a larger audience one show at a time. She’s opened up for Jason Mraz, Zac Brown, Angie Aparo, Better Than Ezra, and Michael Tolcher, played with members of the Pat Magee Band, the Corey Smith Band and the Dave Barnes Band, and has performed on The Rock Boat and The Mayercraft Carrier, a Sister Hazel and John Mayer sponsored cruise. Amy is currently residing in Atlanta, Georgia and working on a volume series EP project, with the first estimated release date of December, 2010. 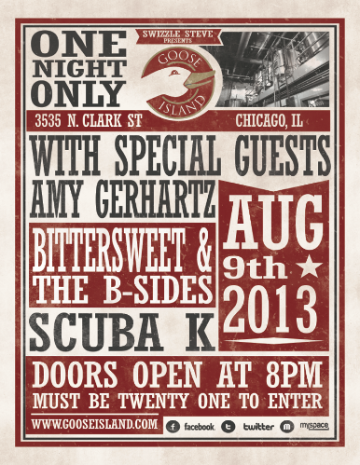