Grace Potter and the Nocturnals SOLD OUT!

Grace Potter and the Nocturnals are like a modern-day version of Tina Turner stroking the microphone in a spangled mini-dress while fronting the Rolling Stones circa Sticky Fingers. The proof is there for all to hear on the band’s third album for Hollywood Records, hitting Spring 2010, and marks an artistic breakthrough for a vital young band caught in the act of fulfilling its immense promise. Little wonder that Grace and her cohorts have chosen to title it,directly and emphatically, Grace Potter and the Nocturnals.

“This record is the first time it’s really been us — the first time we’ve all found each other and ourselves,” says Potter with obvious excitement. “Everybody was totally com- fortable, everything we had was sitting right in front of us, and it just poured out of us. The whole thing was fluid and effortless. In my mind, an album shouldn’t be self-titled unless it feels that way.”

“We had a stylistic epiphany,” Potter says of her band’s exponential leap. “We realized we’re not the kind of band that’s ever gonna fit neatly in one genre, and this time we just let the songs be the songs. We just naturally wound up playing them in a certain way — they all have that beat to them, a physicality and a mood. You have to either want to dance to it or cry to it. But there’s also a feistiness to these songs that’s com- pletely unapologetic.”

On deep-grooved, serrated rockers like “Medicine,” “Paris,” “Tiny Light” and “Oasis,” the new model Grace Potter and the Nocturnals positively swaggers. Not only that, but the hooks are humongous, from Potter’s voice as she belts, teases and soars to Tournet’s uncoiling guitar riffs, positively lethal in their aggressiveness. “Oasis” showcases the band’s newly mounted dual-guitar firepower, as Tournet and Yurco interweave spiraling lines over a refracted hip-hop groove deftly laid down by Burr and Popper, while “Tiny Light” is a powerful song of resilience and hope during dark times.

“Matt and Scott came up with the music for “Medicine” — the drum roll and that killer guitar hook — months before I came up with the lyrics or the vocal melody,” Grace explains. “It gets across the emotion of somebody trying to steal your man away and then fighting for what’s yours, getting back to a place where you’re in control. I picture my adversary as a young Stevie Nicks, but with long black hair, who shows up, woos everybody and freaks me out, until I realize there is something I can do — then I step up and make my own magic.

“When I wrote “Paris,” I was listening to the Kinks nonstop, and I was going for some- thing with a big, primal riff, like “You Really Got Me.” It was the first time I ever reallyjust said, ‘I’m not going to try to tell a story, and I’m not going to try to communicate an emotion. I’m just going to say, basically, ‘I want to have sex right now.’” It’s my favor- ite song to perform. That and “Medicine” are the sexiest, feistiest and the most fun of anything we’ve ever done.”

Potter and her cohorts are equally captivating at the other end of the dynamic and thematic spectrum, on the zeitgeist-capturing widescreen ballad “Colors.” “I wrote it in November 2008, right after Obama was elected,” she says, “and there was a tingle in the air. We were in St. Louis, which is a relatively conflicted city in terms of their politi- cal feelings. We went to the zoo, and the cab driver on the way there was really angry and upset, but the cab driver on the way back to the hotel was listening to people talking about the election on the radio with tears in his eyes. So that to me felt like a moment in time that really needed to be captured, and I wanted to hold onto that moment forever.”

Though GPN initially made a name for themselves — and became a self-sufficient tour- ing unit — on the jam-band circuit, the group’s sound was deeply rooted in the golden age of rock ’n’ roll; they cite Little Feat and J.J. Cale as huge influences early on. Burr and Potter formed the earliest version of the Nocturnals while both were students at St. Lawrence University after he introduced her to the myriad joys of The Last Waltz. So it was that the two soon-to-be bandmates and soulmates formed their bond while in the thrall of The Band, Neil Young, Joni Mitchell, Van Morrison and Bob Dylan. All in all, not a bad place to start.

Because of their ready acceptance on the U.S. touring circuit, they were able to regu- larly play as many as 200 shows a year, shaping and sharpening their sound the old-fashioned way, on stages in front of demanding crowds. With the 2009 arrivals of Popper and Yurco the Nocturnals are entering the next phase of their evolution.

The current lineup came together with downright cosmic serendipity during the spring of 2009, when they were asked to cover some songs from the late ’60s for the VH1 documentary Woodstock: Then and Now soon after the departure of their bass player. After accepting the invitation, Potter, Tournet and Burr went into scramble mode. At the suggestion of a mutual friend, they contacted Popper, who agreed to join them for the session as a one-off. Potter then impetuously threw out the idea that they bring down Yurco from Vermont to add a second guitar.

As soon as they plugged in and started playing at New York’s Avatar Studios, blazing through the Airplane’s “White Rabbit,” Mitchell’s “Woodstock” and Janis Joplin’s “Try,” it was dramatically apparent to all five musicians as well as those gathered in the control room that something special was going on. Popper and Yurco didn’t just fit in, they crushed it. After that beginning, there was no question that this lineup would be per- manent. It was as if the fates had insisted they come together.

Grace, Matt and Scott were well aware of the North Carolina-born Popper, having seen her in action with Ryan Adams and the Cardinals. “We were just in awe of her the entire time,” says Grace. “She was like the hottest thing we’d ever seen.”

Like Burr, Yurco is originally from New Jersey, where he started playing guitar at age 10. Watching him play Keith Richards to Tournet’s Mick Taylor as the two guitarists work their way through complex and fiery extended passages onstage, shoulder-length hair flopping in front of his face, you soon come to understand the key role he plays in the Nocturnals. “Joining this group was the greatest moment of my life,” says Yurco. “Gracie writes great songs, Matty is an incredible drummer and Scotty is one of my favorite guitarists. I really dig the music, and I couldn’t be happier playing guitar in a band I really appreciate.”

The band members are quick to credit Batson for enabling them to find themselves. “Our producer let us be ourselves and just play music together,” says Tournet. “I think we hindered ourselves in some ways — we took some of the bite out of it on the first couple of records. For whatever reasons we were scared to unleash the full thing.... I don’t think we even realized what the full thing was. We’ve evolved into this monster, and Batson pulled the monster out of us.”

What Batson has so vividly captured is a group of exceptional young players in the very act of becoming themselves, as Grace puts it, on an album that is likely to surprise and delight even the band’s most devoted fans, as well as winning them a legion of new ones. Over seven years and three albums, Grace Potter and the Nocturnals have grown from an uncommonly bright and tasteful baby band into a force of nature, blow- ing the roof off the sucker with seeming effortlessness. Make no mistake about it — this band has arrived.

“Every record you make, you always say, ‘This is the one,’” says Matt. “But with this lineup we’ve cracked the code. To get to this point we had to go through those records. It’s been a journey; Nothing but the Water was a fantastic time, going into a barn and going through our Neil Young Harvest/J.J. Cale moment, and This Is Somewhere was an incredible learning experience for us. The journey has culminated with this record. We’ve all matured as musicians, and Benny and Catherine have made a huge differ- ence. We have the dream lineup, the dream sound, the dream producer — the whole family now is officially there.”

“We were a homegrown Vermont band for five years,” says Grace with a wicked smile. “Now we’re a national act that does not want to be fucked with.” After pausing for dra- matic (or comedic) effect, she continues in a more serious vein. “With this record we feel like we’re finally there, after a long struggle. It’s like the song “Oasis,” which is about slogging through the desert feeling like you’re completely lost, with no end to the road and very little hope. I wrote it as advice to myself to keep on walking, because in the middle of the desert there might be an oasis. And that’s what we’ve actually found.” 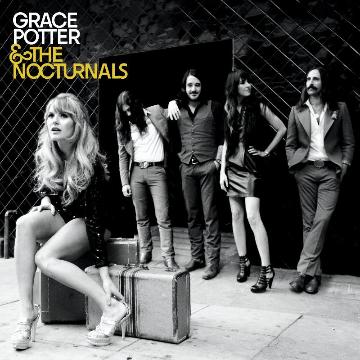