On Sunday, September 8, 2013, noted theatre organist and Steinway Artist™ PIERRE FRACALANZA will perform a solo show titled, “An Experience in Sight and Sound”, in which he perform on the theatre pipe organ with unique projected visuals, similar to those seen in his YouTube videos, which have received great acclaim from around the worold. The show will take place on Sunday, September 8, 2013 at 2:30pm at Warren Performing Arts Center, home of the Dessa and Virginia Byrd Memorial Barton Theatre Pipe Organ originally installed in the Indiana Theatre downtown.

Tickets are $12 presale, $15 at the door. Student tickets are FREE at the door. Visit www.cicatos.org to order tickets, or call (317) 255-8056. The concert will take place at Warren Performing Arts Center, located at 9500 E. 16th St., Indianapolis, part of the Warren Central High School Complex. Free parking.

About Pierre Fracalanza: Pierre Fracalanza discovered the theatre organ while in his early twenties. Having studied at the Eastman School of Music, Pierre was happiest improvising piano and utilizing his vocal talents to entertain. On a fateful night, he visited Theatre Organ Pizza and Pipes in Pontiac, Michigan where jazz organist, Father Jim Miller was playing a Barton hybrid. He inquired if Father Jim Miller offered coaching on theatre organ. And less than a month later, Pierre was on the “rotation” of four organists which supplied lunch and dinner music seven days a week.

Despite a smattering of theatre organ concerts back then, Pierre mostly concentrated on his piano/vocal skills for the next twenty five years. But always intrigued by technology, Pierre did two and three piano concerts, the other pianos being Yamaha Disklavier Reproducing Pianos. Pierre did Disklavier commercials. He introduced the original Yamaha Disklavier to Detroit audiences and when Yamaha produced their Disklavier 2000, a player piano for the new Millenium, Pierre presented that piano in both Detroit and Chicago. On organ, Pierre did many concerts on Yamaha HX-1 and ELX-1 models and then, the Roland Atelier line. And during much of the time, Pierre was and still is a church music director for St. James Catholic Parish in Novi, a parish with 2700 families.

In the last five years, Pierre has been producing performance videos to enhance his piano/vocal shows. And it was in making such videos that Pierre spotted a new breed of virtual organs (powered by the Hauptwerk software engine). Intrigued, Pierre made some contacts and outfitted himself with a baby software theatre organ. Soon after, he became an Artist for Paramount Organ Works and helped introduce the Paramount 320, 332 and 450. A string of YouTube videos later, Pierre found himself back on REAL theatre pipe organs. But armed with pianistic and video experience, he has actively sought to bring a new DIMENSION to the sights and sounds of a theatre pipe organ.

In August of 2012, Pierre was officially named to the Steinway & Sons Artist Roster, a world-wide list of musicians who have exemplified the ideals of Steinway & Sons both now and in the past.

Pierre returned to the Theatre Pipe Organ with his September 2012 Concert at the Senate in Detroit. This past Spring, he concertized in Wichita and at Casa Loma in Toronto. Next year, he will be featured at the ATOS Convention and at RialtoFest, an annual “Pipe Organ Extravaganza” in the Chicago area.

Pierre’s Indianapolis Concert will be an experience in sight and sound. With extensive preparation, the September 8th show will not only tickle your hearing with intricate arrangements, but feast your eyes with visuals. You won’t just hear music that sounds like a roller coaster. You’ll experience riding on one. You won’t just hear big band music. You’ll hear and watch a big band. An afternoon full of surprises awaits as you attend this special concert. And the true star of the show is the Grande Barton Theatre Organ.

About Theatre Organ: Those familiar with the now-gone Paramount Music Palace in Indianapolis are no strangers to the theatre pipe organ. Also known as the ‘Unit Orchestra,’ the theatre organ is a type of pipe organ equipped with characteristically orchestral voices and can easily perform a wide variety of music, ranging from classic Broadway scores to the music of the Beatles and more. They were originally developed to accompany the silent films of the 1920s. Indianapolis is home to a small handful of remaining instruments, located in venues such as the Hilbert Circle Theatre, Warren Performing Arts Center, and Carl Wright Auditorium at Manual High School. 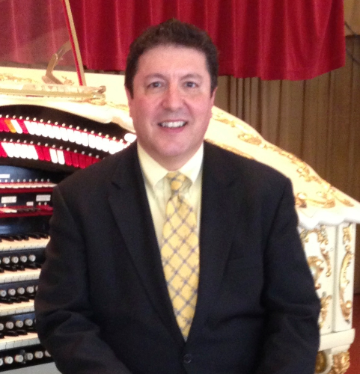