Heart of a Woman

Spartan Stores & Radio Mackinac present the 9th Annual Mackinac Island Music Festival. Heart of a Woman is the theme for this season's festival and as such will feature Michigan's best female musicians.

Barbara Payton and the Instigators will headline the festival on Saturday, October 19th. Payton (who sings with Bob Seger and the Silver Bullet Band, Kid Rock and Blood Sisters) will showcase her extensive blues roots with her band of accomplished musicians including Bobby Murray (the late, great Etta James guitarist). Laura Rain, who has just moved back to Michigan after serving time in the Las Vegas and LA Music Scene, evokes Amy Winehouse and the great Aretha Franklin in her R&B/Soul group Laura Rain and the Caesars.

Tickets $20, available at the door and online

Barbara Payton is a sultry, Detroit rock singer/songwriter with a soulful, bluesy voice. The Instigators include Nolan Mendenhall, Ron Pangborn, Kris Kurzawa and Bobby Murray as well as honorary members Roscoe & Dale Grisa. Recognized as one of Detroit’s most powerful and engaging live performers, Barbara Payton has rocked stages, festivals, arenas and private listening rooms for more than 25 years. In addition to her solo career, Barbara has toured as a background singer for both Bob Seger and Kid Rock. While on tour with Kid Rock from 2007 to 2008, she performed at the Inaugural Youth Ball during President Obama’s inauguration festivities as well as appearances on Ellen, Jimmy Kimmel Live, The Tonight Show with Jay Leno, MTV Tia Tequila’s Rockin’ New Year’s Eve and on the CMT network. She was finally honored as the 2013 recipient of the Detroit Music Awards for Outstanding Blues/R&B Vocalist, Outstanding Blues Artist/Group and Outstanding Rock/Pop Vocalist. Barbara’s vocals may be found on albums by Lukas Nelson, Shaun Murphy, Motor City Horns, Stewart Franke and bandmate Bobby Murray and most notably on Kid Rock’s Rock and Roll Jesus album in addition to her work with Seger on his album Face the Promise. Currently, she is writing and recording with the Instigators and her acoustic rock trio Blood Sisters with Michelle Chenard & Mary McGuire and of course with her favorite boss - Bob Seger - recording and rehearsing in Detroit and in Nashville for his upcoming album.

Laura Rain, has been performing on the Detroit and Los Angeles music scene for well over a decade. Starting out in the trenches of the Motor City blues circuit, Laura quickly encompassed more versatility and began branching out from her blues roots and thus adapted a soul drenched, high energy, sensuous format that is the essence of her show. Classically trained as a Verdi Soprano, she has a diverse range and an extensive repertoire. Guitarist George Friend is the co- producer and co-writer of all their new material. George is known in Detroit as one of the truly authentic blues guitarists. He has toured with Blues great Janiva Magness, Thornetta Davis, Twistin' Tarantualas, Robert Gordon, Jessy Moss, Lisa Finney, Peter Fahey and the list goes on…Today, Laura Rain and the Caesars and touring to support their brand new release Electrified which is receiving rage reviews.

For rooms on Mackinac Island, www.mackinacisland.org 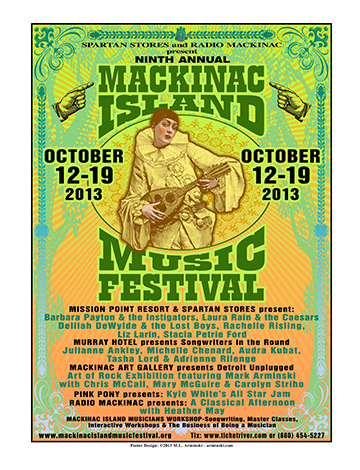