Mackinac Island Music Festival presents Songwriters in the Round

Radio Mackinac and Murray Hotel presents Songwriters in the Round hosted by one of Northern Michigan's Red Hot Best of winners-Michelle Chenard (Blood Sisters/Leavin’ Dodge) along with Detroit Music Award winning musicians) Audra Kubat (Torch with a Twist, Theater Bizzare, The Hounds Below, Night of the Living Dead-The musical), Julianne Ankley (Julianne & the Rogues?) Tasha Lord (Flutter & Wow/Jiva) and Islander Adrienne Rilenge. Tickets are $10 per person, available online and at the door, limited seating.

Michelle Chenard - host Michelle Chenard is a veteran singer/songwriter who has been continually voted a favorite in Northern Michigan as Best Solo Performer, Best of the Best and more in Northern Express, Northern Michigan’s largest newsweekly. Singing and playing guitar since she was seven years old, it’s no surprise that Chenard has garnered such respect and accolades. Her acoustic performances have built her a strong following throughout the Upper Midwest. She continually performs hundreds of shows across the state each year and in 2012 scored a Michigan Emmy® Awards for musical score on the TV documentary Sacrifice and Honor:  A Tribute to our Northern Michigan Veterans.  In addition to her tireless schedule, Michelle has been writing, recording and performing with her new band, Blood Sisters.

Julianne Ankley Julianne Ankley grew up on a large cattle farm and riding her horses in the rural thumb area of Michigan, it was here where she was raised on country music. She would often ride in the tractors alongside her father when he worked the huge fields...and the radio was always on. "There was always music in our lives.  Dad would come home after a long day and one of the first things he did was spend 10 minutes taking the day’s frustrations out at the piano. I loved those moments listening to him play."  Around age three, Julianne decided to teach herself how to play the piano, and anyone that knew her growing up would often hear her singing wherever she went. This dynamic singer-songwriter has been paving her own musical road ever since. Her first solo CD, “It Ain’t Over” was nominated for a Detroit Music Award for Outstanding Country Recording. Julianne’s vocals and songwriting equally shine on the disc, which led to her first music video for the song “No Place For A Lullabye”, directed by Stephen Clark from WXYZ-TV in Detroit. The video and song were used by HomeAid of America in PSAs for their campaigns to build temporary housing for the homeless. Things keep happening for Julianne, her much anticipated second CD, “Vivid” was recently released and she was honored to be perform the National Anthem at Comerica Park for a Detroit Tiger Baseball Game this past year.

Audra Kubat A regular at the Mackinac Island Music Festival, Detroit Music Award winning folk artist Audra Kubat is a prolific songwriter and she has a lot to share lyrically and musically as her life if fully enveloped in music and community. Currently, she is working on her new album and video while composing music for independent films and theatre productions. She recently created and performed an original score to accompany a massive projection-mapping spectacle on the facade of the Detroit Public Library’s at last year’s Dlectricity, Festival of Lights. As a dedicated and involved member of the Detroit community, she has been a member of the local non-profit group United Peace Relief, where she helped feed the homeless living in the city by distributing food and clothing. In addition, she teaches music to Detroit’s children notably at the Capuchin Soup Kitchen, donating lessons and time to help create inspiration through music. While attending Wayne State University, she studied English, with a focus in Art History, Music, Theater, and the Fine Arts. Local radio appearances include in-studio performances on WDET (National Public Radio), 89x Homeboy Show, the Mitch Albom Show on WJR, and the River. Television performances include an appearance on Backstage Pass/PBS, Crystal's Motown Cafe, and 'Detroit Counsel of the Arts Presents: An evening with Singer-songwriter Audra Kubat'.

Tasha Lord Tasha Lord, classically trained vocalist, fronts the Americana band The Flutter and Wow (named after the Elvis Costello tune) but for the music festival Tasha will perform an acoustic showcase with her husband and musical partner Brian Lord. The result of a reluctant, but serendipitous collaboration between the husband and wife songwriting team was undeniable as their musical chemistry won out. Tasha and Brian Lord both performed in hard rock bands, but when she and Brian began collaborating, something new and softer emerged for both rockers which can only be described as Alternative-Americana. They began writing and recording and released their first single Black Train and that led them to the 2013 Detroit Music Award nomination for Best Folk Group. Tasha Lord never tires, she has sung on countless tracks for record labels in the Detroit area and works as a musical director, booking manager and commercial model for clients such as MGM Grand, Ford, and PNC Bank. Escanaba native Brian Lord is also the guitarist for Mitch Ryder and the Detroit Wheels, 50 Amp Fuse, and is continually writing, engineering, producing and recording. 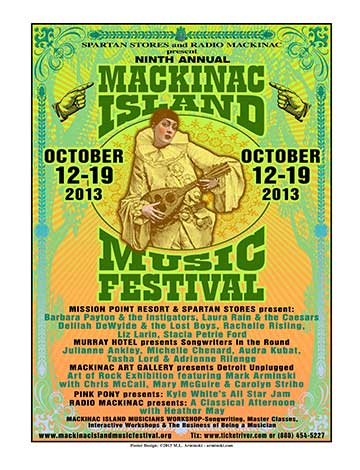