“The Biggest Single Night of Fly Fishing Film In the World!”

Startingwith the release of DRIFT in 2008, RISE in 2009 and CONNECT in 2011, ConfluenceFilms has always offered early screenings of their films to entities andorganizations that were willing to screen the films in the right venues in aprofessional, high-quality manner, and give a large portion of the proceedsback to a local conservation entity or project.  Through this program,Confluence has helped raise close to $200,000.00 for conservation with theirfirst three films over the past five years.

Filmingfor “Waypoints” has taken place on St. Brandon’s Atoll in the Indian Ocean, inthe jungles of Venezuela for payara, in Patagonian Chile, in India and Nepalfor Golden Mahseer, and in Southeast Alaska for spring steelhead. As withDrift, Rise and Connect, the new film project is the result of a partnership byDirector and Cinematographer Chris Patterson of Warren Miller Entertainment andExecutive Producer and Writer Jim Klug of Yellow Dog Flyfishing Adventures.

The film will be shown Friday November 8that the Whitefish Moose Lodge (on 10th St. West near the Wave) at 7pm.  Doors open at 6pm for social hour,beer, wine, and snacks.  Tickets are $10and can be purchased at Genesis Kitchen in Whitefish starting November 1,2013.  You can also purchase ticketsonline at www.TicketRiver.com Tickets will be available at the door, but seating is limited so get themearly! 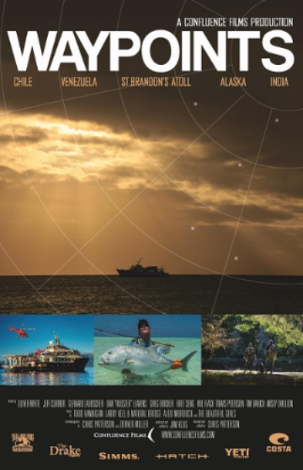